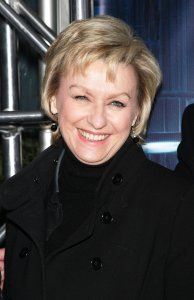 Tina and Harry Come to America: Tina Brown, Harry Evans, and the Uses of Power

Tina Brown (born Christina Hambley Brown on November 21, 1953, in Maidenhead, England) is a journalist, magazine editor, columnist, talk-show host and author of The Diana Chronicles, a biography of Diana, Princess of Wales, a personal friend. Born a British citizen, she took United States citizenship in 2005. She became the editor-in-chief of Tatler magazine at the age of 25, and rose to prominence in the American media industry as the editor of the magazines Vanity Fair from 1984 to 1992 and of The New Yorker from 1992 to 1998. In 2007, she was named to the Magazine Editors Hall of Fame. She has also been honored with four George Polk Awards, five Overseas Press Club awards, and ten National Magazine Awards. She is currently writing a non-fiction work on Bill and Hillary Rodham Clinton.

In 1939, George Hambley Brown married the actress Maureen O'Hara, though the marriage, which, according to O'Hara, was never consummated owing to her parents' intervention, was later annulled. George later met and married (1948) Bettina Kohr, who was Laurence Olivier's press agent. In her later years, Bettina worked as a gossip columnist for an English-language magazine for expatriates in Spain, where she and George lived in retirement.

FULL ARTICLE AT WIKIPEDIA.ORG
This article is licensed under the GNU Free Documentation License.
It uses material from the Wikipedia article "Tina Brown."
Back to Article
/