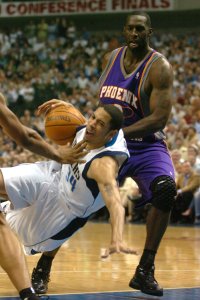 A versatile 6'10" forward with a soft shooting touch, Thomas was tabbed as a future NBA star when he was still in high school, and was selected to the McDonald's All-American team after averaging 25.3 points and 14.5 rebounds per game as a senior at Paterson Catholic High School. Following his freshman year at Villanova University, he was drafted seventh overall by the New Jersey Nets in the 1997 NBA Draft and was immediately traded to the Philadelphia 76ers in exchange for the Sixers' draft pick (Keith Van Horn).

Thomas enjoyed a solid rookie season, averaging 11.0 points per game, and was named to the NBA's All-Rookie 2nd Team. The Sixers would grow impatient with a sophomore slump from Thomas, though, and in 1999 he was traded to the Milwaukee Bucks.

FULL ARTICLE AT WIKIPEDIA.ORG
This article is licensed under the GNU Free Documentation License.
It uses material from the Wikipedia article "Tim Thomas."
Back to Article
/