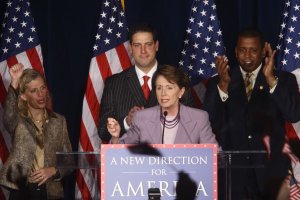 U.S. News // 6 years ago
Officer arrested, charged for allegedly assaulting teen at McDonald's
A police officer from Georgia's DeKalb County has been arrested for allegedly assaulting a teenager at a McDonald's restaurant, officials said.
U.S. News // 6 years ago
Employee complains of rats in Miami jail
Miami-Dade County health inspectors are investigating reports by employees of rats "running rampant" at the county jail, officials said.
U.S. News // 7 years ago
Strickland won't make Ohio governor bid
Ted Strickland said Tuesday he won't run against Ohio Gov. John Kasich next year to get his old job back.
Top News // 1 decade ago
NRA sets $15M sight on Obama
The powerful National Rifle Association says it plans to spend $15 million to try to paint Sen. Barack Obama as a threat to the Second Amendment.
Top News // 1 decade ago
Texas may get relief from rain
Parts of Texas that have been drenched with heavy rain and flooding may get some relief, but forecasters say it will be a while yet before the area dries out.
Odd News // 1 decade ago
Jockstrip: The world as we know it
TSA takes PB&J away from Rep. ... Judge finds landlord liable for noise ... Landlord forced to live in own building ... Ga. dealer faces real suit for fake art ... The world as we know it from UPI.
Odd News // 1 decade ago
TSA takes PB&J away from Rep.
A U.S. congressman from Ohio endeavoring to make a point by living on $3 a day had his peanut butter and jelly confiscated at a Manchester, N.H., airport.
Business News // 1 decade ago
U.S. knocked for tolerating cheap yuan
A Maryland economist wants the White House to become more assertive in its dealings with China over alleged currency manipulation.
Top News // 1 decade ago
UPI Political Roundup
House races deciphered ... Bush midterm blitz ... Mondale healthy as a horse ... a digest of national election and campaign news from United Press International.
Top News // 1 decade ago
UPI Political Roundup
GOP eyeing Traficant's seat ... Arkansas' first lady behind ... Mink's hubby files in Hawaii. A daily national digest of election and political news from United Press International.
Top News // 1 decade ago
UPI's Capital Comment for May 10, 2002
Capital Comment -- Daily news notes, political rumors, and important events that shape politics and public policy in Washington and the world from United Press

Tim Ryan was born in Niles, Ohio and graduated from John F. Kennedy High School in Warren, where he played football as a quarterback. He received a Bachelor of Arts degree in political science from Bowling Green State University in 1995 and was a member of Delta Tau Delta fraternity. In 2000, he earned a Juris Doctor degree from Franklin Pierce Law Center in Concord, New Hampshire.

Ryan served on the staff of controversial congressman Jim Traficant (D-Ohio) in the mid-1990s. From 2000 to 2002 he served a term in the Ohio State Senate. After Traficant was convicted on criminal charges in 2002, Ryan declared his candidacy for the Congressional seat of his home district.

FULL ARTICLE AT WIKIPEDIA.ORG
This article is licensed under the GNU Free Documentation License.
It uses material from the Wikipedia article "Tim Ryan."
Back to Article
/