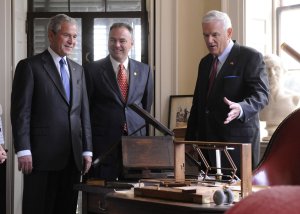 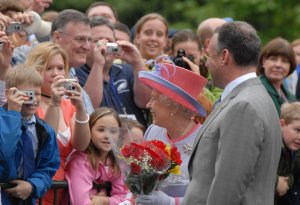 U.S. News // 3 weeks ago
Pennsylvania congressman tests positive for COVID-19
A Pennsylvania lawmaker announced Saturday that he had tested positive for the coronavirus and wouldn't be participating in a special U.S. House vote on a $25 billion bill to fund the U.S. Postal Service.

U.S. News // 3 months ago
GOP congressman, family test positive for COVID-19
Rep. Tom Rice has said he, his wife and their son have tested positive for the deadly and infectious coronavirus.

U.S. News // 3 months ago
Lawmakers pause for 8:46 to honor George Floyd, others at Capitol
Senate Democrats at the Capitol on Thursday honored George Floyd and two other black Americans who were recently killed with 8 minutes and 46 seconds of silence.

Defense News // 9 months ago
Senate committee passes bill prohibiting president from leaving NATO
The Senate Foreign Relations Committee has passed a bill to explicitly prohibit any president of the United States from withdrawing from NATO without congressional approval.

U.S. News // 1 year ago
Right, left wing groups conduct competing D.C. rallies
WASHINGTON - More than 200 Trump supporters from Proud Boys, an alt-right group, and a larger number of counterprotesters confronted each other at the Freedom Plaza.

We realize we haven't done this for a very long time in Virginia, so we're going to consider ourselves the underdogs until we finally break the string

He compensates for Mr. Obama's relative youth, and as chairman of the Senate Foreign Relations Committee he makes up for the candidate's acknowledged lack of experience on the international stage

Timothy Michael "Tim" Kaine (born February 26, 1958) is a Virginia politician. Kaine served as the 70th Governor of Virginia from 2006 to 2010, and is the current chairman of the Democratic National Committee. He was elected governor in 2005, after serving as Lieutenant Governor of Virginia and Mayor of Richmond, Virginia.

Kaine was considered a possible choice to be Barack Obama's running mate in 2008, but was not ultimately chosen.

On April 5, 2011, Kaine announced his candidacy for the United States Senate seat in Virginia being left open by the retiring Jim Webb in 2012 election after weeks of speculation.

FULL ARTICLE AT WIKIPEDIA.ORG
This article is licensed under the GNU Free Documentation License.
It uses material from the Wikipedia article "Tim Kaine."
Back to Article
/