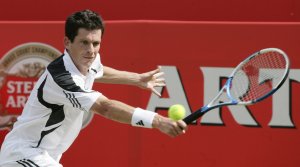 It was obviously a close match, but at this stage, I'm looking at the positive side of things, and it was good to be out there, good to be nervous, having so many tight rallies and just competing 100 percent mentally and physically

I think it's difficult not to be aware of it, but certainly in the last couple of years I've paid way more attention to it

It's not good right now, but the doctors seem to think that I need some intense treatment and some rest and the problem won't linger

I think probably adding to the fact of the other semifinal, it makes it a little bit more difficult

I think with the support that he had, and the obvious support that I had, I think the atmosphere was incredible

Timothy Henry "Tim" Henman OBE (born 6 September 1974) is a retired British professional tennis player. Henman played a serve-and-volley style of tennis that suited the grass courts of Wimbledon. He was the first player from the United Kingdom since Roger Taylor in the 1970s to reach the semi-finals of the Wimbledon Men's Singles Championship.

Having reached six Grand Slam semi-finals, won 15 career ATP titles (11 in singles and 4 in doubles), and been ranked number 4 in the world, Henman was one of the United Kingdom's most successful open era male tennis players. He retired after helping Great Britain defeat Croatia in a Davis Cup match played in September 2007..

FULL ARTICLE AT WIKIPEDIA.ORG
This article is licensed under the GNU Free Documentation License.
It uses material from the Wikipedia article "Tim Henman."
Back to Article
/