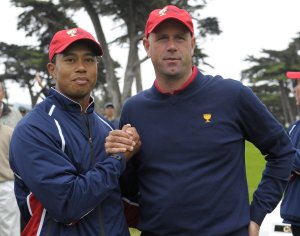 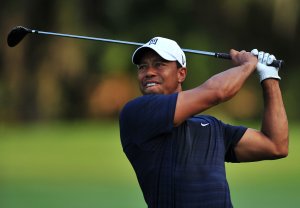 Sports News // 2 days ago
Tiger Woods shoots 69 at Riviera, gives Kobe Bryant tribute
Tiger Woods carded a 2-under par 69 and performed a subtle tribute to late Los Angeles Lakers legend Kobe Bryant during the first round of the 2020 Genesis Open.

Sports News // 6 days ago
Rory McIlroy passes Brooks Koepka as No. 1 golfer; Tiger Woods drops
For the first time in more than four years, Rory McIlroy is the No. 1 golfer in the world.

Sports News // 2 months ago
Presidents Cup golf: U.S. closes gap vs. Internationals
The United States team narrowed its deficit against the International squad by one point in the third round of the 2019 Presidents Cup Saturday in Melbourne.

Sports News // 2 months ago
Presidents Cup golf: U.S. gains momentum behind Tiger Woods, Justin Thomas
The International team still led by three after the second round of the 2019 Presidents Cup, but the Americans picked up some late momentum Friday at Royal Melbourne Golf Club in Melbourne.

Sports News // 2 months ago
Presidents Cup golf: How to watch, betting odds
The 2019 Presidents Cup begins Thursday in Melbourne, but American viewers can start watching the golf tournament Wednesday, due to the time difference. Here is how to watch and the latest betting odds.

Now I'll have nothing to do but work on my game

The physical pain from that car accident has long healed. But the pain in my soul is more complex and unsettling; it has been far more difficult to ease -- and to understand

Eldrick Tont "Tiger" Woods (born December 30, 1975) is an American professional golfer whose achievements to date rank him among the most successful golfers of all time. Currently the World No. 1, he is the highest-paid professional athlete in the world, having earned an estimated $90.5 million from winnings and endorsements in 2010.

Woods has won 14 professional major golf championships, the second highest of any male player (Jack Nicklaus leads with 18), and 71 PGA Tour events, third all time. He has more career major wins and career PGA Tour wins than any other active golfer. He is the youngest player to achieve the career Grand Slam, and the youngest and fastest to win 50 tournaments on tour. Additionally, Woods is only the second golfer, after Jack Nicklaus, to have achieved a career Grand Slam three times. Woods has won 16 World Golf Championships, and has won at least one of those events each of the 11 years they have been in existence.

Woods has held the number one position in the world rankings for the most consecutive weeks and for the greatest total number of weeks. He has been awarded PGA Player of the Year a record ten times, the Byron Nelson Award for lowest adjusted scoring average a record eight times, and has the record of leading the money list in nine different seasons.

FULL ARTICLE AT WIKIPEDIA.ORG
This article is licensed under the GNU Free Documentation License.
It uses material from the Wikipedia article "Tiger Woods."
Back to Article
/