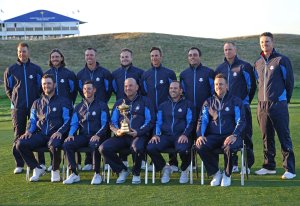 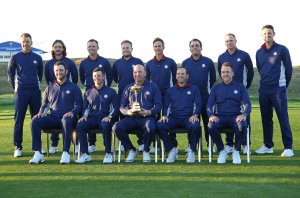 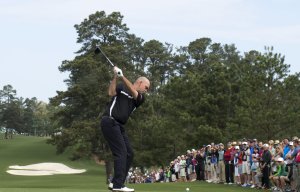 Sports News // 4 years ago
Golf notebook: Gary Player laying claim to most Senior titles
When Bernhard Langer captured the Senior PGA Championship recently for his ninth major title on the PGA Tour Champions, he surpassed Jack Nicklaus' eight as the most on the senior circuit.

Golf // 5 years ago
Golf notebook: "Thrift store green jacket" mystery unraveled
The mystery behind the "Thrift Store Green Jacket" may have been solved

Golf // 5 years ago
Golf news: Will Bubba Watson get final spot on 2016 Ryder Cup team?
Bubba Watson is No. 7 in the World Golf Ranking, but he still is not on the 12-man United States team for the 2016 Ryder Cup.

On the front nine, I've not seen golf for many years like Miguel played

I probably got what I deserved. I didn't drive the ball very well and I created some problems for myself

I'm happy with my performance over the first two days

Thomas Bjørn (born 18 February 1971) is a professional golfer from Denmark who plays on the European Tour. He is the most successful Danish golfer to have played the game having won thirteen tournaments worldwide on the European Tour. In 1999 he also became the first Dane to qualify for a European Ryder Cup team. Despite his success all over the world, Bjørn is widely remembered for his infamous collapse at Royal St. George's during the 2003 Open Championship, when he led by two strokes with three holes to play, but took three attempts to get out of a greenside bunker on the par three 16th, handing the tournament to young rookie Ben Curtis. This moment is so well recognised that even to the present day the bunker on the 16th at Royal St. George's is affectionately known as 'Bjørn's Bunker'.

Bjørn started his career playing on the Challenge Tour from 1993 to 1995. In 1995 he won four tournaments on the Challenge Tour to earn his card for his debut year on the European Tour in 1996. Bjørn made his breakthrough immediately winning his maiden tour title in his debut season at the Loch Lomond World Invitational. He became the first golfer from Denmark to win a tournament on the European Tour. He finished the 1996 season placed tenth on the Order of Merit. The follow up season in 1997 was steady with a number of top ten finishes without a win, however Bjørn did not have long to wait until his next win arrived. He won early in the 1998 season in Perth, Australia taking the Heineken Classic for his second European Tour title. Despite an over par final round of 74, Bjørn won by a single stroke from Ian Woosnam. A couple months later after a five week break from competitive golf, Bjørn won for the second time in 1998 at the Peugeot Open de Espana after a final round 66 took him to 21 under and one stroke ahead of the chasing pack. He later said “I didn’t really expect this after taking five weeks off, but when your confidence has gone like mine did after winning in Perth, it just shows it’s best to take a break and regroup." After his two wins he finished the year 6th on the Order of Merit.

After a winless period due to injuries and the birth of his first child, Bjørn returned to the winner's circle in October 1999 at the Sarazen World Open. This was his fourth career European Tour win and after an unspectacular year, he jumped up the standings to finish the season 14th on the Order of Merit.

FULL ARTICLE AT WIKIPEDIA.ORG
This article is licensed under the GNU Free Documentation License.
It uses material from the Wikipedia article "Thomas Bjorn."