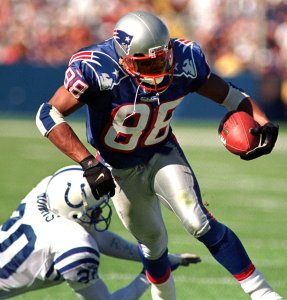 NFL // 1 month ago
Sale of $518K voided from Tom Brady's 'final' TD football
The previous $518,000 sale of a football that was advertised as being used for NFL quarterback Tom Brady's "final" touchdown pass was voided, auction house Lelands announced.

NFL // 6 months ago
Fan's surrendered ball from Brady's 600th TD pass worth up to $1M
The football from Tom Brady's 600th career touchdown pass, given to a fan and returned to the Tampa Bay Buccaneers quarterback, is worth between $500,000 and $1 million, several auction houses said.

Terry Tyree Glenn (born July 23, 1974 in Columbus, Ohio) is an American football wide receiver who is currently a free agent. He was drafted by the New England Patriots seventh overall in the 1996 NFL Draft. He played college football at Ohio State.

He has also played for the Green Bay Packers and Dallas Cowboys.

FULL ARTICLE AT WIKIPEDIA.ORG
This article is licensed under the GNU Free Documentation License.
It uses material from the Wikipedia article "Terry Glenn."