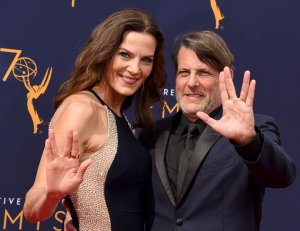 Theresa Lee "Terry" Farrell (born November 19, 1963) is an American actress and former fashion model. She is perhaps best known for her performances in the television series Star Trek: Deep Space Nine and Becker.

Farrell is the daughter of Kay Carol Christine Bendickson and Edwin Francis Farrell, Jr. Later, her mother married David W. Grussendorf, who adopted Terry and her sister, Christine. Before becoming a model, she played a Christmas elf at a mall in Cedar Rapids. In 1978, she left her hometown for a summer in Mexico City as a foreign exchange student. She has since been fond of big cities, so in her junior year of high school, the nearly six feet tall Farrell submitted her image to the Elite modeling agency in New York City. Shortly after, at the age of 16, she was summoned to New York City and, within two days of arriving, had an exclusive contract with Mademoiselle.

After 18 months of modeling, she studied acting with Kate McGregor Stewart while still modeling on the side. Her first major roles were in the short-lived 1983 television series Paper Dolls playing a model and in the feature film Back to School with Rodney Dangerfield. In the spring of 1989, she began studying acting with Stella Adler and appeared in a number of guest-starring roles in series like Quantum Leap and The Cosby Show. In 1992, she played Cat in a second pilot for a U.S. version of Red Dwarf, which was not picked up.

FULL ARTICLE AT WIKIPEDIA.ORG
This article is licensed under the GNU Free Documentation License.
It uses material from the Wikipedia article "Terry Farrell."
Back to Article
/