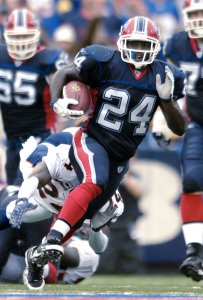 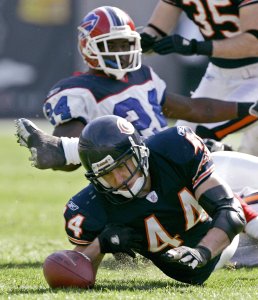 Terrence Dewayne McGee (born October 14, 1980 in Smith County, Texas) is an American football cornerback and kick returner who currently plays for the Buffalo Bills of the National Football League. He was originally drafted by Bills in the fourth round (111th overall) of the 2003 NFL Draft. He played high school football at Athens High School in Athens, Texas, and played collegiately at Northwestern State.

He is considered a versatile threat for his kick return skills as well as his defensive play. On Christmas Eve 2005 against the Cincinnati Bengals, he became the first player to score touchdowns on an interception and a kick return in the same game.

McGee exhibited his speed in the 2007 Dallas game. Six minutes into the third quarter, McGee returned a kickoff 103 yards.

FULL ARTICLE AT WIKIPEDIA.ORG
This article is licensed under the GNU Free Documentation License.
It uses material from the Wikipedia article "Terrence McGee."
Back to Article
/