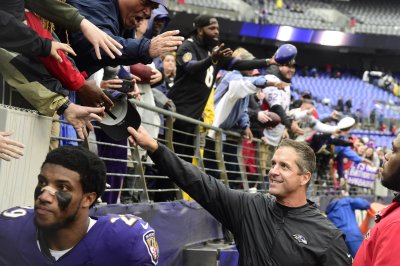 My parents always tell me to aim for the moon, so if you miss at least you'll be among the stars

Terrell Raynonn Suggs (born October 11, 1982 in Minneapolis, Minnesota) is an American football linebacker for the Baltimore Ravens of the National Football League. He was originally drafted by the Ravens tenth overall in the 2003 NFL Draft. He played college football at Arizona State.

As a teenager, Suggs attended several schools. Initially, he attended Chandler High School but later transferred to Hamilton High School, both in Chandler, Arizona. He graduated in 2000, from Hamilton.

Suggs attended Arizona State University, where he played defensive end for both Bruce Snyder and Dirk Koetter. He finished his career there with 163 tackles, including a school career record 65.5 tackles for losses, and NCAA career record 44 sacks, 14 forced fumbles, 3 fumble recoveries, 2 interceptions, and 9 passes deflected. As a junior, he had 24 sacks. He was a secondary education/history major.

FULL ARTICLE AT WIKIPEDIA.ORG
This article is licensed under the GNU Free Documentation License.
It uses material from the Wikipedia article "Terrell Suggs."
Back to Article
/