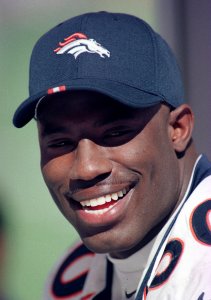 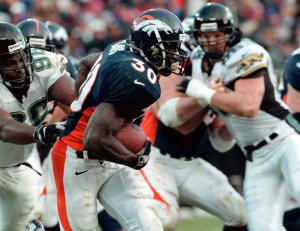 NFL // 2 years ago
49ers brass heads into offseason set at QB
INDIANAPOLIS -- The San Francisco 49ers arrived at the annual NFL Scouting Combine this week with about 21 things on their mind.
College Football // 2 years ago
No. 4 Georgia pulls away from Missouri
ATHENS, Ga. -- On a weekend with its share of upsets, Georgia's offense made sure the No. 4 Bulldogs didn't suffer a similar fate, rolling up 696 total yards to rout Missouri 53-28 on Saturday night.

Sports News // 2 years ago
NFL: Hall of Fame class 'could be start of pretty good team'
CANTON, Ohio -- On an unseasonably cool summer night in the birthplace of professional football, seven more immortals swelled the ranks of the Pro Football of Fame to 310.

NFL // 2 years ago
New Orleans Saints owner Tom Benson gets statue, stadium named after him in Canton
Tom Benson Hall of Fame Stadium in Canton, Ohio was dedicated on Thursday, hours before the Arizona Cardinals and Dallas Cowboys were to meet in the Hall of Fame Game. 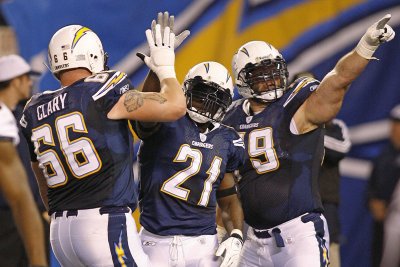 NFL // 3 years ago
Terrell Owens rants on Twitter after Hall of Fame snub
Now it's personal.

Entertainment News // 3 years ago
Russell Wilson, Rob Gronkowski read Mean Tweets on 'Jimmy Kimmel'
Some of the biggest stars in the NFL appeared on "Jimmy Kimmel Live! Thursday" for the second football-infused edition of Mean Tweets.

I never thought (about retiring), even when I got back some of the results on my knee. I felt I could come back and work hard to overcome the injury. I always believed that I could play

That's all I could pretty much think about on the bus, the airplane, when I got home

Terrell Lamar Davis (born October 28, 1972 in San Diego, California) is a former American football running back who played for the Denver Broncos of the National Football League from 1995 to 2001. Davis was drafted by the Broncos in the sixth round (196th pick overall) of the 1995 NFL Draft. Davis is the Denver Broncos all-time leading rusher, with 7,607 rushing yards. When he played, he was often referred to as T.D., by players, fans and the media. The phrase, "T.D. for TD", was frequently used, as well. Davis' initials, T.D., are also an abbreviation for "touchdown" (TD).

In his senior year, the coaches gave him a chance at fullback, in a three back formation. He was also given playing time in other positions, including kicker, and helped lead his team to a 12-2 record. Terrell also set the Lincoln Prep record in the discus throw as a member of the track team. After graduation, Terrell went on to play football at Long Beach State University. His brother Reggie Webb was a tailback there before him, and he persuaded the school to grant Terrell a scholarship.

At Long Beach State, Davis joined the football team that was coached by former Washington Redskins coach George Allen. The coaches didn't think he was ready to play, so he was redshirted his freshman year in order to give him an extra year of eligibility. Davis never got to play a real game for coach Allen, because Allen died after the end of 1990 season. Davis played the following season and rushed for 262 yards on 55 carries. Long Beach State eliminated its football program due to budget concerns at the end of the 1991 season, ending in a dismal 2–9 record. Davis wanted to continue playing, so he needed to find another school to transfer to. The University of Georgia and the University of California, Los Angeles (UCLA) encouraged Davis to join their teams. Davis ended up choosing Georgia. During his first season at Georgia for the Bulldogs, Davis played backup to Garrison Hearst, one of the leading rushers in college football and a candidate for the Heisman Trophy. After Hearst graduated, Davis became the top running back during the 1993 season, and rushed for 824 yards on 167 carries. Davis' senior season at Georgia got off to a rocky start when he aggravated a tear in his hamstring muscle against Tennessee early in the season, which took him out of the lineup for three games. Davis claims coach Ray Goff never liked him and forced him to practice while injured, which led to his torn hamstring. Davis ran for only 445 yards on 67 carries that year, but in his last two games, he rushed for 113 and 121 yards respectively. Those totals got him invited to the Blue-Gray Football Classic game, after another senior running back couldn't play. Davis' reputation for being injury-prone hurt his standing in the NFL draft, along with the fact that Coach Goff denied scouts game film of Davis.

FULL ARTICLE AT WIKIPEDIA.ORG
This article is licensed under the GNU Free Documentation License.
It uses material from the Wikipedia article "Terrell Davis."
Back to Article
/