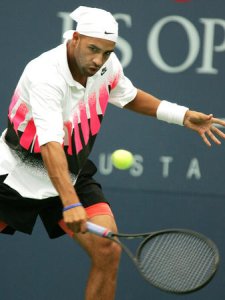 Teimuraz Gabashvili (Russian: Теймураз Габашвили, Georgian თეიმურაზ გაბაშვილი; born May 23, 1985 in Tbilisi, Georgia) is a tennis player from Russia. He was born in Georgia but moved to Moscow, Russia. He turned pro in 2001. He plays singles and doubles, won futures titles in singles and double in his early career.

He began his career at age 6. His brother plays professional basketball in Georgia. When Gabashvili played, he was always nervous so his friends began calling him "Tsunami". He enjoys playing soccer and basketball.

FULL ARTICLE AT WIKIPEDIA.ORG
This article is licensed under the GNU Free Documentation License.
It uses material from the Wikipedia article "Teimuraz Gabashvili."
Back to Article
/