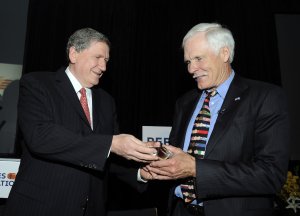 Sports News // 4 years ago
Flamboyant TV sports reporter Sager dies of cancer at 65
Nearly three years after he said he was battling cancer, longtime sports reporter Craig Sager died of complications from the ailment on Thursday. He was 65.

Odd News // 6 years ago
Alleged CNN 'doomsday' video for the end of the world from the 1980s released
A video allegedly made to be played as CNN's last broadcast, for the end of the world, has been released.
World News // 7 years ago
Ted Turner hospitalized in Argentina with appendicitis
CNN founder Ted Turner flew to Buenos Aires for surgery after being diagnosed with appendicitis during a visit to Argentina, a spokesman said Friday.

We're being beaten by insurgents who don't even have any tanks

I hung in there as long as I could. I've done my best

It was a big mistake to lose control of CNN. I lost control over it, and I lost it a long time ago

Robert Edward "Ted" Turner III (born November 19, 1938) is an American media mogul and philanthropist. As a businessman, he is known as founder of the cable news network CNN, the first dedicated 24-hour cable news channel. In addition, he founded WTBS, which pioneered the superstation concept in cable television. As a philanthropist, he is known for his $1 billion gift to support UN causes, which created the United Nations Foundation, a public charity to broaden support for the UN. Turner serves as Chairman of the United Nations Foundation board of directors.

Turner's media empire began with his father's billboard business, which he took over at 24 after his father's suicide. The business, Turner Outdoor Advertising, was worth $1 million when Turner took it over in 1963. Purchase of an Atlanta UHF station in 1970 began the Turner Broadcasting System. Cable News Network revolutionized news media, covering the Space Shuttle Challenger disaster in 1986 and the Persian Gulf War in 1991. Turner turned the Atlanta Braves baseball team into a nationally popular franchise and launched the charitable Goodwill Games.

Turner's penchant for controversial statements earned him the nicknames "The Mouth of the South" and "Captain Outrageous."

FULL ARTICLE AT WIKIPEDIA.ORG
This article is licensed under the GNU Free Documentation License.
It uses material from the Wikipedia article "Ted Turner."
Back to Article
/