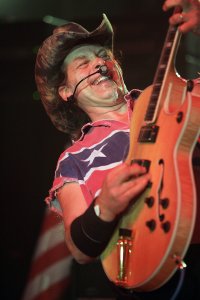 Top News // 3 years ago
The Almanac
On Dec. 13, 2003, a bearded Saddam Hussein, the deposed Iraqi president, was captured by U.S. troops in a small underground hideout near his hometown of Tikrit, ending an eight-month manhunt.

Entertainment News // 4 years ago
A-list to D-list, celebrities love their politicians
Celebrity political endorsements are nothing new, but they reached a fever pitch in 2008 during President Obama's run for the White House. The 2016 campaign appears appears to be bringing out even more.

All they got to do is give me a call, and I'll whack 'em and stack 'em and kill 'em and grill 'em and celebrate with the venison party God has blessed us with

All they got to do is give me a call, and I'll whack 'em and stack 'em and kill 'em and grill 'em and celebrate with the venison party God has blessed us with

Theodore Anthony "Ted" Nugent ( /tɛd ˈnuːdʒɨnt/; born December 13, 1948) is an American guitarist, musician, vocalist, author, and activist. From Detroit, Michigan, he originally gained fame as the lead guitarist of The Amboy Dukes, before embarking on a lengthy solo career. He is also noted for his conservative political views and his ardent defense of hunting and gun ownership rights.

Nugent was born and raised in Detroit, Michigan, the son of Marion Dorothy (née Johnson) and Warren Henry Nugent. He moved to Palatine, Illinois as a teenager, and has two brothers: John and Jeffrey. Raised Catholic, Nugent has mentioned his ties with the Christian faith many times during interviews, and has stated that he regularly attends church. He attended St. Viator High School in Arlington Heights, Illinois.

Nugent has released more than 34 albums, and has sold a career total of 30 million records. He was known throughout his early career in the 1970s for using Fender amps, a large part of his signature sound, and is now also famous for playing the hollow Gibson Byrdland guitar. Gibson Guitar Corporation has developed a model named for him.

FULL ARTICLE AT WIKIPEDIA.ORG
This article is licensed under the GNU Free Documentation License.
It uses material from the Wikipedia article "Ted Nugent."
Back to Article
/