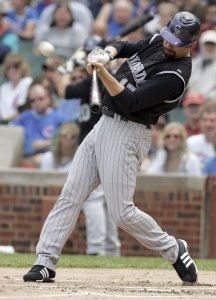 Lilly was drafted by the Los Angeles Dodgers in the 23rd round of the 1996 Major League Baseball Draft. After two seasons in the Dodgers farm system, he was traded (along with Peter Bergeron, Wilton Guerrero and Jonathan Tucker) to the Montreal Expos for Hiram Bocachica, Mark Grudzielanek and Carlos Pérez.

Lilly made his Major League debut for the Expos on May 14, 1999 against the Pittsburgh Pirates, pitching one inning in relief. He made his first start on September 19 against the Atlanta Braves. He pitched in nine games for the Expos, with three starts.

FULL ARTICLE AT WIKIPEDIA.ORG
This article is licensed under the GNU Free Documentation License.
It uses material from the Wikipedia article "Ted Lilly."
Back to Article
/