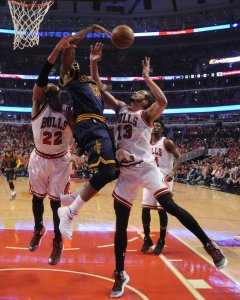 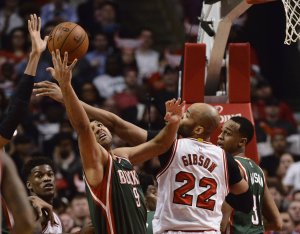 NBA // 3 years ago
Timberwolves' Taj Gibson tries to block shot with shoe
Minnesota Timberwolves forward Taj Gibson lost his shoe, but didn't give on a play against the Sacramento Kings, trying to use the sneaker to block a shot.

NBA // 3 years ago
Lakers' LeBron James aiming to continue mastery over Timberwolves
It does not matter what team LeBron James is on, games against the Minnesota Timberwolves often go well for the superstar.

NBA // 4 years ago
Timberwolves have big plans for Blazers
PORTLAND, Ore. -- The Minnesota Timberwolves have gone big as they try to make up for the loss of shooting guard Jimmy Butler, who is out for at least the rest of the regular season following surgery on his right knee.

Taj Jami Gibson (born June 24, 1985) is a professional basketball player for the Chicago Bulls of the National Basketball Association (NBA). Following the 2010 signing of Carlos Boozer, he played as the second string power forward. Gibson played three seasons of collegiate basketball for the USC Trojans and was selected 26th overall by the Bulls in the 2009 NBA Draft.

Gibson played at the University of Southern California, where he was a member of the Phi Kappa Psi fraternity. As one of the oldest freshmen in the country at age 22 in 2007 he was named to the Pac-10 All freshman team. He helped beat rival UCLA in 2008.

FULL ARTICLE AT WIKIPEDIA.ORG
This article is licensed under the GNU Free Documentation License.
It uses material from the Wikipedia article "Taj Gibson."