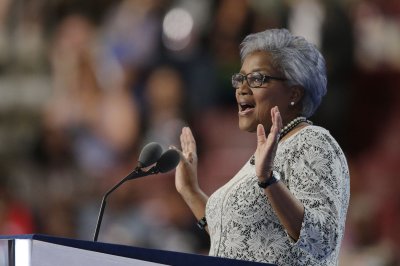 U.S. News // 4 years ago
Donna Brazile out at CNN as network bristles over Clinton debate collusion claims
When political commentator Donna Brazile assumed leadership of the DNC in July, she went from full-time to part-time CNN contributor. Now, she's out entirely.

U.S. News // 5 years ago
Sanders campaign laying off half its staff in wake of California defeat
Democratic presidential candidate Sen. Bernie Sanders is set to lay off about half of his campaign staff the day after a crushing defeat in California.

U.S. News // 5 years ago
Bernie Sanders, Hillary Clinton will get more debates
With the field for the Democratic nomination for president down to two candidates, the Democratic National Committee has agreed to more debates.
U.S. News // 8 years ago
Politics 2014: Nobody's sayin' nuthin' about runnin'
Former Secretary of State Hillary Clinton's social schedule last week added more fuel to the political flames about her future and possible designs on the White House.
U.S. News // 8 years ago
Observer: Speaking circuit gold mine for Hillary Clinton, rivals
Public speaking gives ex-U.S. Secretary of State Hillary Clinton a chance to build her image and potential rivals a way to monitor her actions, observers said.
U.S. News // 9 years ago
Politics 2012: Making lemonade from lemons
No love ... A party invitation ... Endurance, not experience, necessary ... PAC-ing it in ... A first on the first day of the DNC ...
Top News // 1 decade ago
Strategists say Obama has to get tough
Some Democratic strategists say they're concerned that U.S. Sen. Barack Obama hasn't reacted strong enough to John McCain's increasingly harsh assaults.
Top News // 1 decade ago
Obama tries to define brand of patriotism
Democratic presidential hopeful Barack Obama has sought to present his own brand of patriotism, analysts say.
Top News // 1 decade ago
Super delegates may decide Dem. nominee
The Democratic U.S. presidential hopefuls are locked in a tight race for delegates, so the so-called super delegates may decide the nominee, a report said.
Top News // 1 decade ago
Rove trying to reunite Republicans
Now that he knows he won't spend the next few months consulting criminal lawyers, White House adviser Karl Rove is trying to reunite the Republican Party.

It's very smart politically on a lot of levels. First, it's a demonstration that he's keeping his promise to govern in a bipartisan way. Second, the fact is, every time you open up a seat in the House or Senate that an incumbent Republican holds, you give your party an opportunity to win one back. And some of those seats may come our way

If a perception develops that somehow this decision has been made not by voters participating in primaries or caucuses, but by politicians in some mythical back room, I think that the public could react strongly against that

If we see an opening, we want to be able to take it

His career in presidential politics began in 1980 when he was a delegate counter for Jimmy Carter. He was chief political consultant on Al Gore's 2000 United States presidential campaign. He worked for John Kerry in 2004, and has managed several campaigns abroad. He has consulted successful politicians on elections in Israel, Ireland, Bolivia, and other nations.

Devine was born in 1955, in Providence, Rhode Island, where he later attended the La Salle Academy High School. He was an Interscholastic All-Star in basketball, and developed an interest in American History and Politics. He graduated from Brown University and Suffolk University School of Law.

FULL ARTICLE AT WIKIPEDIA.ORG
This article is licensed under the GNU Free Documentation License.
It uses material from the Wikipedia article "Tad Devine."
Back to Article
/