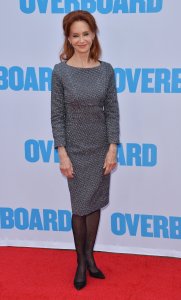 Entertainment News // 6 months ago
What to stream New Year's weekend: Countdown specials, 'Cobra Kai'
Celebrities and musical guests will be counting down to 2021 across various specials, "Cobra Kai" kicks into high gear with its third season and "RuPaul's Drag Race" enters into Season 13 this holiday weekend.

Swoosie Kurtz (born September 6, 1944) is an American actress. She began her career in theater during the 1970s and shortly thereafter began a career in television, garnering ten nominations and winning one Emmy Award. She has also appeared somewhat sporadically in films from the late 1970s up until today, including prominent roles in such films as Dangerous Liaisons (1988), Citizen Ruth (1996), and Liar Liar (1997) among others. Throughout her career she has remained active in theater, earning five Tony Award nominations and winning two over the last three decades. She most recently starred as Lily Charles in the short lived ABC dramedy series Pushing Daisies.

Kurtz was born in Omaha, Nebraska, the only child of author Margo (née Rogers) and Air Force Colonel Frank Kurtz, Jr., a much-decorated WWII American bomber pilot. She got her unique first name "Swoosie" (which rhymes with Lucy, rather than woozy) from her father. It is derived from the sole surviving example, at the National Museum of the United States Air Force, of the B-17D Flying Fortress airplane, named "The Swoose" or simply "Swoose" - half swan, half goose - which her father piloted during World War II. As a military brat, Kurtz moved frequently. Kurtz attended the University of Southern California, where she majored in drama. She then attended the London Academy of Music and Dramatic Art.

Kurtz's first television appearance was on To Tell the Truth at age eighteen, introducing her father and two impostors. Kurtz began her career in theater, making her Broadway debut in the 1975 revival of Ah, Wilderness!. She first gained wide recognition in 1978 for two theatrical productions, Uncommon Women and Others, the breakthrough play by Wendy Wasserstein in which she appeared in a 1977 workshop at the Eugene O'Neill Theater Center and then Off-Broadway, and the musical A History of the American Film for which she won a Drama Desk Award. Kurtz was soon awarded Broadway's "triple crown" (the Tony, Drama Desk, and Outer Critics Circle awards) for her portrayal of Gwen in Lanford Wilson's Fifth of July. She won a second Tony for her performance as Bananas in a 1986 revival of The House of Blue Leaves by John Guare.

FULL ARTICLE AT WIKIPEDIA.ORG
This article is licensed under the GNU Free Documentation License.
It uses material from the Wikipedia article "Swoosie Kurtz."
Back to Article
/