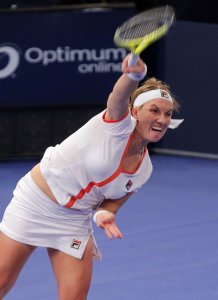 Tennis // 3 years ago
2017 U.S. Open preview, seedings: Rafael Nadal, Roger Federer the main attractions
Anticipation of another showdown between Rafael Nadal and Roger Federer is part of the lure of this year's U.S. Open, which starts Monday.

Tennis // 3 years ago
Venus Williams falls in fourth round at French Open
Venus Williams' 20th attempt to win the French Open ended just like the other 19 -- with her not the last person standing in Paris. 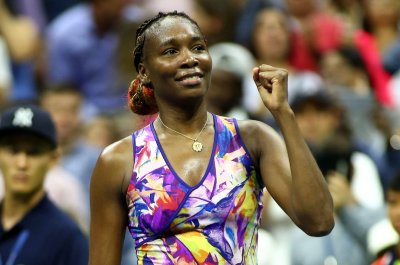 Tennis // 3 years ago
Venus Williams looks spry while knocking off Johanna Konta in Rome
Venus Williams, a 36-year-old American, and Anett Kontaveit, a 21-year-old qualifier, provided the biggest news while advancing to the quarterfinals in Rome.

Tennis // 3 years ago
"Extra motivated" Eugenie Bouchard dispatches Maria Sharapova in Madrid
Eugenie Bouchard was highly critical of Maria Sharapova's return to tennis after a 15-month doping ban and she was animated Monday after knocking off the Russian 7-5, 2-6, 6-4 in a second-round match at the Madrid Open.

It can't be a bad season when you win a Grand Slam, but we have to now play the most important tournament of the year, this one, and we want to win it

Svetlana Aleksandrovna Kuznetsova ( Светла́на Алекса́ндровна Кузнецо́ва (help·info)); born June 27, 1985) is a Russian professional tennis player and as of August 29, 2011 ranked No. 17 in the WTA singles and and No. 92 in the doubles ranking. Kuznetsova has appeared in four singles Grand Slam finals, winning two, and has also appeared in six doubles finals, winning once. She has qualified five times for the round-robin stage of the WTA Tour Championships but has never qualified for the semifinals.

Her first Grand Slam title came at the 2004 US Open, making her the third Russian woman to win a Grand Slam title, after Anastasia Myskina and Maria Sharapova who won at the 2004 French Open and 2004 Wimbledon tournaments respectively. Kuznetzova's second Grand Slam title was the 2009 French Open, defeating Serena Williams in the quarterfinal, Samantha Stosur in the semifinal, and compatriot Dinara Safina in the final in straight sets. At the 2006 French Open and the 2007 US Open singles tournament she was the runner-up, both times to Belgian player Justine Henin. As a result, Kuznetsova obtained her new WTA ranking of No. 2, her best to that date. Kuznetsova has won a total of 13 WTA and 1 ITF singles titles and 14 WTA doubles titles to date and US$15,792,587 in prize money, making her the second top Russian earner on court and number 11 of all female tennis players to date and No. 5 of active players, after only Serena Williams, Venus Williams, Kim Clijsters, and Maria Sharapova respectively.

Svetlana Aleksandrovna Kuznetsova was born in Leningrad. Her father, Aleksandr Kuznetsov, has coached five Olympic and world cycling champions. Kuznetsova's mother, Galina Tsareva, is a six-time world champion and holder of 20 world records in cycling, and her brother, Nikolay Kuznetsov, was a silver medalist at the 1996 Summer Olympics in Atlanta and coach of the Russian cycling team Lokomotiv. Svetlana Kuznetsova began to play tennis at the age of 7 and moved to Spain 6 years later for better training and coaching. While there she became fluent in Spanish.

FULL ARTICLE AT WIKIPEDIA.ORG
This article is licensed under the GNU Free Documentation License.
It uses material from the Wikipedia article "Svetlana Kuznetsova."
Back to Article
/