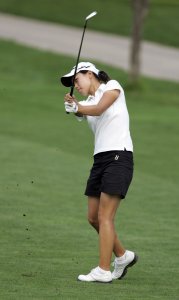 Golf // 4 years ago
LPGA: Cristie Kerr bounces back to grab second-round lead in Scotland
Cristie Kerr overcame a tough start on Friday to claim a one-stroke lead after the second round of the Aberdeen Asset Management Ladies Scottish Open in North Ayrshire, Scotland.

Yoo had a distinguished amateur career. In 2001 she won the Korean Junior Golf Championship. She played on the Korean National Golf team in both 2002 and 2004. In 2004 Yoo won the Korean Amateur in addition to being a quarter-finalist at the U.S. Women's Amateur.

FULL ARTICLE AT WIKIPEDIA.ORG
This article is licensed under the GNU Free Documentation License.
It uses material from the Wikipedia article "Sun Young Yoo."