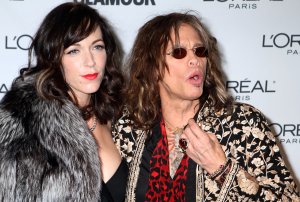 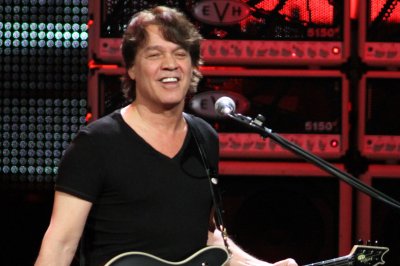 Entertainment News // 1 month ago
Musicians mourn Eddie Van Halen: 'He was an absolute legend'
Musicians have taken to social media to mourn the death of guitarist Eddie Van Halen of the band Van Halen.

Music // 10 months ago
Aerosmith honored at MusiCares mega-concert
Rock band Aerosmith was honored as the 2020 MusiCares Person of the Year at a star-studded tribute concert in Los Angeles.

Music // 1 year ago
Aerosmith is MusiCares' 2020 Person of the Year
Aerosmith will be honored for its philanthropy and impact on American music at a MusiCares gala Jan. 24 ahead of the Grammys.

There have been a ton of different games that have been guitar driven, but none quite like this

With the help of my family and team of medical professionals, I am taking responsibility for the management of my pain and am eager to be back on the stage and in the recording studio with my band mates Joe Perry, Joey Kramer, Tom Hamilton and Brad Whitford

After last summer, we've been looking forward to getting back out there with a vengeance. I can't wait to feel the roar of the American audiences again and give this summer what it needs -- a double dose of Aerosmith

Steven Tyler (born Steven Victor Tallarico on March 26, 1948) is an American singer, songwriter, and multi-instrumentalist, best known as the frontman and lead singer of the Boston-based rock band Aerosmith, in which he also plays the harmonica, and occasional piano and percussion. He is the father of actress Liv Tyler. He is also known as the "Demon of Screamin'" and is equally known for his on-stage acrobatics. During his high-energy performances, he usually dresses in bright, colorful outfits with his trademark scarves hanging from his microphone stand. In the 1970s, Tyler rose to prominence as the frontman of Aerosmith, which released such milestone hard rock albums as Toys in the Attic and Rocks. In the late 1970s and early 1980s, Tyler had a heavy drug and alcohol addiction, and the band's popularity waned.

He completed drug rehabilitation in 1986 and has subsequently maintained sobriety for over 20 years, aside from an addiction to prescription painkillers in the late 2000s, for which he successfully received treatment in 2009. After Aerosmith launched a remarkable comeback in the late 1980s and early 1990s with the albums Permanent Vacation, Pump, and Get a Grip, Tyler became a household name and has remained a relevant rock icon. As a result, he has since embarked on several solo endeavors including guest appearances on other artists' music as well as film and TV roles (including as a judge on American Idol). However, he has continued to record music and perform with Aerosmith, after more than 41 years in the band. He is included among Rolling Stone's 100 Greatest Singers. He was also ranked 3rd on Hit Parader's Top 100 Metal Vocalists of All Time. In 2001 he was inducted into the Rock and Roll Hall of Fame with Aerosmith, and he was the presenter when AC/DC was inducted into the Hall of Fame in 2003.

Steven Victor Tallarico was born March 26, 1948 in Yonkers, New York, the son of Susan (née Blancha), a secretary, and Victor A. Tallarico, a classical musician and pianist. His father was of Italian and German descent and his mother was of Polish, Russian and English ancestry (his maternal grandfather had changed his surname from "Czarnyszewicz" to "Blancha"). Tyler has stated that he grew up "under his father's piano", and that from what his father played, he got "that emotional thing" that he has with music. When he was sixteen, he formed his first band, called The Strangeurs, later changed to Chain Reaction, where he was the drummer, and later the lead singer. Tyler also had been part of a few local bands, like William Proud and The Left Banke. He was expelled from Roosevelt High School due to his drug use. He graduated from the Leonard Quintano for Young Professionals School in 1967. He attended Woodstock with Joe Perry and Joey Kramer, his future Aerosmith bandmates.

FULL ARTICLE AT WIKIPEDIA.ORG
This article is licensed under the GNU Free Documentation License.
It uses material from the Wikipedia article "Steven Tyler."
Back to Article
/