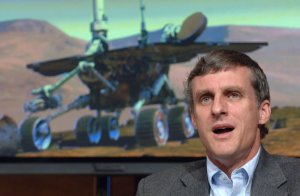 We're living on borrowed time. But we're pushing onward as hard as we can

This is different from any rock ever seen on Mars

When basalt erupts, it often does so as very fluid lava, rather than erupting explosively

Those layers of rock, if we can get to them, will tell us new stories about the environmental conditions long ago

Steven W. Squyres (born 1957) is the Goldwin Smith Professor of Astronomy at Cornell University in Ithaca, New York. His research area is in planetary sciences, with a focus on large solid bodies in the solar system such as the terrestrial planets and the moons of the Jovian planets. Squyres is principal investigator of the Mars Exploration Rover Mission (MER). He is the recipient of the 2004 Carl Sagan Memorial Award and the 2009 Carl Sagan Medal for Excellence in Communication in Planetary Science. On October 28, 2010, Dr. Squyres received the 2010 Mines Medal for his achievements as a researcher and professor. He is the brother of Academy Award-nominated film editor Tim Squyres.

Squyres was raised in the town of Wenonah in southern New Jersey.

Squyres attended Gateway Regional High School in Woodbury Heights, New Jersey. He received his B.S. in Geology in 1978, his Ph.D. from Cornell in 1981 (where he was a student of Carl Sagan), and then spent five years as a postdoctoral associate and research scientist at NASA Ames Research Center before returning to Cornell as a faculty member. He received the H. C. Urey Prize from the Planetary Division of the American Astronomical Society in 1987. In 2007, he was awarded the prestigious Benjamin Franklin Medal in Earth and Environmental Science by the Franklin Institute. Is also a member of the college fraternity Tau Kappa Epsilon.(TKE)

FULL ARTICLE AT WIKIPEDIA.ORG
This article is licensed under the GNU Free Documentation License.
It uses material from the Wikipedia article "Steve Squyres."
Back to Article
/