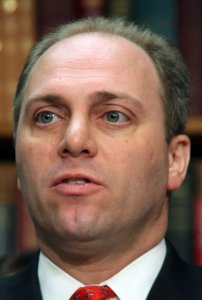 U.S. News // 1 month ago
Arizona teacher testifies in-person classes place students into 'petri dish'
A coworker of an Arizona teacher who died after contracting COVID-19 said that returning to schools with in-person instruction will expose students, teachers and other staff to the virus.

U.S. News // 1 year ago
House Democrats to empower committee leaders to enforce subpoenas
The House is preparing to vote on a resolution that would strengthen the ability of committees to enforce their subpoenas.

U.S. News // 1 year ago
House passes bill to provide citizen path for DACA recipients
The House passed a bill on Tuesday providing a path to citizenship to people protected under the Deferred Action for Childhood Arrivals program.

U.S. News // 1 year ago
Trump mulling national emergency, steel barrier to end shutdown
White House and congressional staffers were met again Sunday on a way to end impasse on federal funding over a border wall. The shutdown has lasted 15 days.

Stephen Joseph "Steve" Scalise (born October 6, 1965) is the U.S. Representative for Louisiana's 1st congressional district, serving since 2008. He is a member of the Republican Party. He previously served in the Louisiana Senate and the Louisiana House of Representatives.

Scalise graduated from the Catholic Archbishop Rummel High School in Metairie in Jefferson Parish and earned a bachelor of science degree from Louisiana State University in Baton Rouge, with a major in computer programming and a minor in political science.

FULL ARTICLE AT WIKIPEDIA.ORG
This article is licensed under the GNU Free Documentation License.
It uses material from the Wikipedia article "Steve Scalise."
Back to Article
/