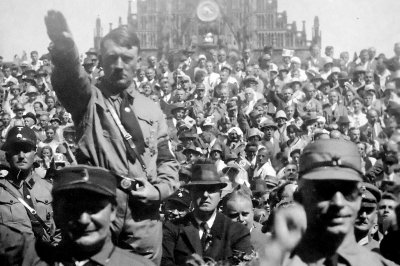 Born on Chicago's North Side to a middle-class Jewish family, Goodman began writing and performing songs as a teenager, after his family had moved to the near north suburbs. He graduated from Maine East High School in Park Ridge, Illinois in 1965. In the fall of 1965, He entered the University of Illinois and pledged Sigma Alpha Mu (Sammies) fraternity where he, Ron Banyon, and Steve Hartmann formed a popular rock cover band, "The Juicy Fruits". He left college after one year to pursue his musical career. In the early spring of 1967 Goodman went to New York, staying for a month in a Greenwich Village brownstone across the street from the Cafe Wha? where Goodman performed regularly during his brief stay there. Returning to Chicago he intended to restart his education but he dropped out again to pursue his musical dream full time after discovering the cause of his continuous fatigue was actually leukemia, the disease that would be present during the entirety of his recording career, until his death in 1984. In 1968 Goodman began performing at the Earl of Old Town in Chicago and attracted a following. By 1969, Goodman was a regular performer in Chicago, while attending Lake Forest College. During this time Goodman supported himself by singing advertising jingles.

In September 1969 he met Nancy Pruter, who was attending college while supporting herself as a waitress. They were married in February, 1970. Though he experienced periods of remission, Goodman never felt that he was living on anything other than borrowed time, and some critics, listeners and friends have said that his music reflects this sentiment. His wife Nancy, writing in the liner notes to the posthumous collection No Big Surprise, characterized him this way:

FULL ARTICLE AT WIKIPEDIA.ORG
This article is licensed under the GNU Free Documentation License.
It uses material from the Wikipedia article "Steve Goodman."
Back to Article
/