NFL // 2 years ago
Sunday showdown: Every NFL player, owner reactions to Donald Trump from early games
Based on dramatic reactions in the National Football League, especially during Sunday's pregame ceremonies, it appears that President Donald Trump managed to bring together league officials, team owners and players.

NFL // 3 years ago
NFL owner on CTE study: 'If I had a son, I'd have him playing football today'
Stephen Ross had some candid remarks at Miami Dolphins training camp regarding the a study which found CTE in 99 percent of deceased NFL players' brains.

NFL // 3 years ago
Source: Only four NFL teams had Mixon on draft board
Four NFL franchises said that they would have considered drafting former Oklahoma Sooners running back this weekend, according to an anonymous survey.

NFL // 3 years ago
Watch: Oakland Raiders fan makes 'Mark Davis' jersey, sets it on fire
It's not LeBron James taking his talents to South Beach, but Oakland Raiders fans are understandably upset about the team's move to Las Vegas. 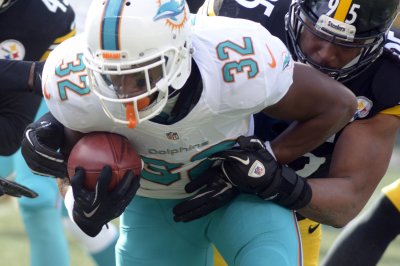 NFL // 3 years ago
Here's why Oakland Raiders fans are flipping to the Miami Dolphins
One of the many questions lingering after NFL team owners voted to allow the Oakland Raiders to move to Las Vegas was who was the lone owner against it?

Stephen Alan "Steve" Ross is the inaugural Franco Modigliani Professor of Financial Economics at the MIT Sloan School of Management. He is known for initiating several important theories and models in financial economics. He is a widely published author in finance and economics, and is coauthor of one of the best-selling Corporate Finance texts.

Ross is best known for the development of the arbitrage pricing theory (mid-1970s) as well as for his role in developing the Binomial options pricing model (1979; also known as the Cox-Ross-Rubinstein model). He was an initiator of the fundamental financial concept of risk-neutral pricing. In 1985 he contributed to the creation of the Cox-Ingersoll-Ross model for interest rate dynamics. Such theories have become an important part of the paradigm known as neoclassical finance.

FULL ARTICLE AT WIKIPEDIA.ORG
This article is licensed under the GNU Free Documentation License.
It uses material from the Wikipedia article "Stephen Ross."
Back to Article
/