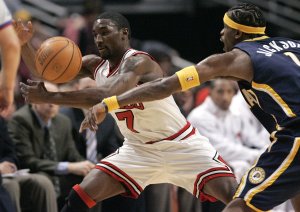 Science News // 2 years ago
Study to help scientists predict climate change's impact on biodiversity
A new study suggests a species ability to survive and adapt to climate change depends on the speed at which climate conditions shift.

NBA // 3 years ago
Stephen Curry, Golden State Warriors beat Utah Jazz for Game 1 victory
The defensive-minded Jazz would like to shorten the games against the Warriors, the NBA's highest-scoring team, in their Western Conference semifinal series.

I thought about this (Tuesday) when I was shooting around

Stephen Jesse Jackson (born April 5, 1978) is an American professional basketball player for the NBA's Milwaukee Bucks. Jackson is a 6'8" guard-forward.

Jackson was born in Houston and grew up in Port Arthur, Texas. When growing up, Jackson worked in his grandfather's soul food restaurant in Port Arthur, Texas where he used to wash dishes and bus tables. At the age of 14, Jackson saw his half-brother Donald die, aged 25. Following the violent tragedy, Jackson often surmised how he wished he could have been there to assist and protect a member of his family. "You can't tell me seeing his brother die that way hasn't had an effect," recalls Pacers CEO Donnie Walsh. "To me, it's why he is always coming to the help of his teammates."

He prepped at Lincoln High School in Port Arthur before transferring to Oak Hill Academy (Virginia) where he earned All-America honors in 1996. He was the leading scorer in the 1996 McDonald's All-American game, on a team that included Kobe Bryant, Jermaine O'Neal and Tim Thomas. Following a commitment to join the University of Arizona, Jackson was ruled academically ineligible. He attended Butler Community College.

FULL ARTICLE AT WIKIPEDIA.ORG
This article is licensed under the GNU Free Documentation License.
It uses material from the Wikipedia article "Stephen Jackson."
Back to Article
/