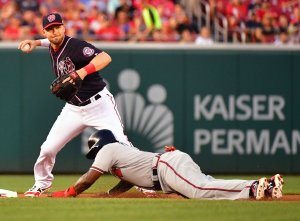 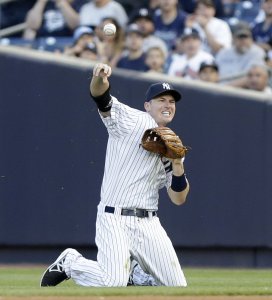 MLB // 4 years ago
Michael Wacha, St. Louis Cardinals outlast Washington Nationals
Adrian Sanchez was batting in the majors for the first time. Matt Bowman was trying to secure his first big league save.

MLB // 4 years ago
Chicago Cubs hang on for 5-4 win over Washington Nationals
The game got off to a bad start for Javier Baez.

MLB // 4 years ago
Miami Marlins rally in ninth for 8-7 win over Washington Nationals
Enny Romero's neck whipped around in an instant.

MLB // 4 years ago
Jacob deGrom helps New York Mets win series finale against Washington Nationals
The long hair and the protected path he took to the major leagues might both be of the 21st century variety for Jacob deGrom.

It showed that Stephen Drew really wanted to be a Diamondback.

Stephen Oris Drew (born March 16, 1983, in Hahira, Georgia) is a shortstop in Major League Baseball who plays for the Arizona Diamondbacks. He is the brother of Boston Red Sox outfielder J.D. Drew and former major leaguer Tim Drew.

Drew went to Lowndes High School in Valdosta, Georgia. Following in the footsteps of his brother, J.D., he played college baseball at Florida State University under head coach Mike Martin where he was Baseball America's Freshman of the Year, and ACC Rookie of the Year.

FULL ARTICLE AT WIKIPEDIA.ORG
This article is licensed under the GNU Free Documentation License.
It uses material from the Wikipedia article "Stephen Drew."