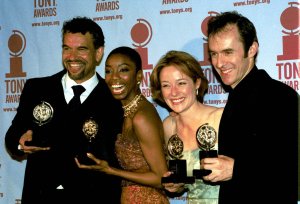 TV // 11 months ago
'Alex Rider' renewed for Season 2 ahead of U.S. premiere
"Alex Rider" has been renewed for a second season ahead of the teen spy drama's Friday premiere on IMDB TV in the United States.

TV // 6 years ago
'Game of Thrones' Season 4 finale, Season 5 preview heading to IMAX theaters
HBO has announced the last two episodes of Season 4 of "Game of Thrones" will be shown on select IMAX screens for a limited time this month.

Stephen J. Dillane (born 30 November 1956) is an English actor. He won a Tony Award for his lead performance in Tom Stoppard's play The Real Thing.

Dillane was born in Kensington, London, to an English mother, Bridget (Curwen), and an Australian surgeon father, John Dillane. He read history and political science at the University of Exeter and afterward became a journalist for the Croydon Advertiser. Unhappy in his career, he read how actor Trevor Eve gave up architecture for acting and was thus inspired to enter the Bristol Old Vic Theatre School.

Dillane is a distinguished theatre actor and his notable roles include Archer in The Beaux' Stratagem (Royal National Theatre, 1989; spelled Stephen Dillon on the poster), Prior Walter in Angels in America (1993), Hamlet (1994), Clov in Samuel Beckett's Endgame (1996), Uncle Vanya (1998), Henry in Tom Stoppard's The Real Thing (for which he won a Tony Award in 2000) and a one-man version of Macbeth (2005). He has also performed T.S. Eliot's 'Four Quartets' in London and New York City, and is soon to be seen in the 2010 Bridge Project's productions of 'The Tempest' and 'As You Like It'.

FULL ARTICLE AT WIKIPEDIA.ORG
This article is licensed under the GNU Free Documentation License.
It uses material from the Wikipedia article "Stephen Dillane."