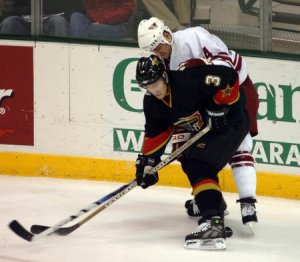 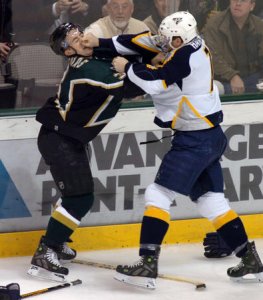 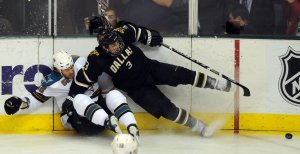 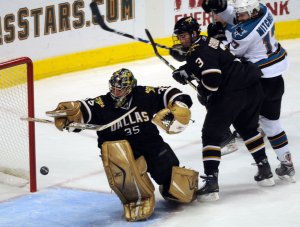 Robidas was selected 164th overall by the Montreal Canadiens in the 7th round of the 1995 NHL Entry Draft. He played two seasons with Montreal (1999–2000 and 2000–2001). He was claimed by the Atlanta Thrashers on October 4, 2002 in the NHL Waiver Draft, and subsequently dealt to the Dallas Stars for a 6th round selection in 2002. After a brief stint with Dallas, he was traded to the Chicago Blackhawks in November 2003 for Jon Klemm and a fourth round selection in the 2004 NHL Entry Draft. He played for the Frankfurt Lions of the Deutsche Eishockey Liga (DEL) during the entire 2004–05 lockout season. Later in the season he was joined on the team by fellow NHLer Doug Weight, and the pair became fan favorites. In August 2004, following the lockout, the Stars signed the free agent to a two-year contract. Had the Stars not signed him, he probably would have played another season in Germany as there had been no offers from any other NHL team. In December 2006 the Stars signed him to a 3-year, $4.5 million contract extension. On March 17, 2007, he was punched while charging Jordin Tootoo of the Nashville Predators after Mike Modano had been checked by Tootoo. Tootoo still had his gloves on when he punched Robidas, and he hit Robidas square in the face. Robidas went down hard and was taken off the ice on a stretcher.He was immediately sent to a hospital for examination. He later checked out of the hospital after being diagnosed with a concussion and flew back to Dallas with the team.

During the 2008 NHL playoffs against the Anaheim Ducks in game 5, Robidas took a clearing shot from Todd Marchant off the face. That shot put him down on the ice for awhile, and it turned out that it had broken his nose. He needes some stitches, but he came back into the game (wearing a full face-mask) and had a solid outing even though Dallas came up short 5–2. The next game in Dallas, Robidas scored the game tying goal shortly before he would set up Stu Barnes for the series-clinching goal, as Dallas went on to defeat the Anaheim Ducks 4–1 and take the series 4–2 on home ice.

FULL ARTICLE AT WIKIPEDIA.ORG
This article is licensed under the GNU Free Documentation License.
It uses material from the Wikipedia article "Stephane Robidas."
Back to Article
/