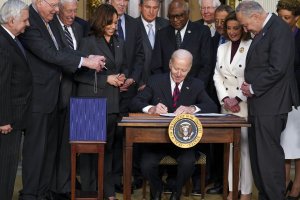 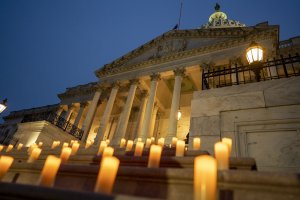 U.S. News // 3 months ago
Bipartisan negotiators agree on 'framework' for omnibus spending bill
Congressional negotiators announced Wednesday they have reached agreement on the framework for a massive government spending package, one day after the House passed a stopgap funding bill.

U.S. News // 10 months ago
House panel to vote on swapping Roger Taney bust with Thurgood Marshall's at Capitol
A House committee is scheduled to vote Monday on a proposal to replace a bust of former Supreme Court Justice Roger Brooke Taney with one of Thurgood Marshall, who was the first Black person to serve on the high court.

Top military leaders, Republican senators and former opponents continue to express that it is critical that Congress pass legislation empowering the Defense Department to implement a repeal itself

We'd like the Senate to move first on this issue

I am disappointed Republicans chose to play politics with a bill that enjoys strong bipartisan support and would increase access to school meal programs, improve the standards of food provided, and help reduce childhood obesity

The Senate has refused to move forward on that issue

Steny Hamilton Hoyer (pronounced /ˈstɛni ˈhɔɪ.ər/; born June 14, 1939) is the U.S. Representative for Maryland's 5th congressional district, serving since 1981. The district includes a large swath of rural and suburban territory southeast of Washington, D.C.. He is a member of the Democratic Party.

He was first elected in 1980 and served as the House Majority Leader from 2007 to 2011. He had previously served as House Minority Whip from 2003 to 2007, and was reelected to that post in 2011. These positions make him the second-ranking figure in the House Democratic Leadership hierarchy.

Hoyer was born in New York City but grew up in Mitchellville, Maryland. His mother, Jean (née Baldwin), was American, and his father, Steen Theilgaard Høyer, was Danish and a native of Copenhagen; "Steny" is a variant of his father's name, "Steen", and Hoyer is an anglicized form of the fairly common Danish surname "Høyer". He graduated from Suitland High School in Suitland, Maryland.

FULL ARTICLE AT WIKIPEDIA.ORG
This article is licensed under the GNU Free Documentation License.
It uses material from the Wikipedia article "Steny Hoyer."