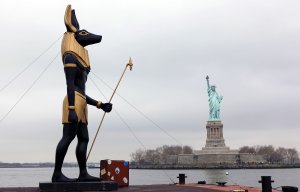 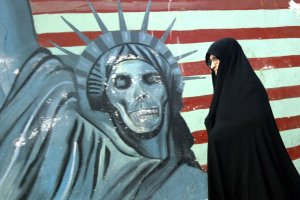 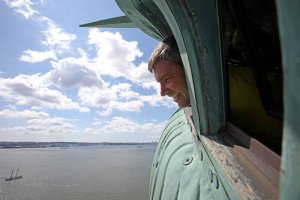 Defense News // 1 month ago
USNS Comfort arrives in N.Y., military mobilizes for COVID-19 fight
The Navy hospital ship USNS Comfort arrived in New York City on Monday to relieve the strain on hospitals dealing with the COVID-19 pandemic, a day after the USNS Mercy treated its first patient near Los Angeles.

U.S. News // 2 months ago
Growing list of public lands across U.S. close due to coronavirus pandemic
Washington on Thursday joined a growing list of states to close public lands for at least two weeks due to the global COVID-19 pandemic. 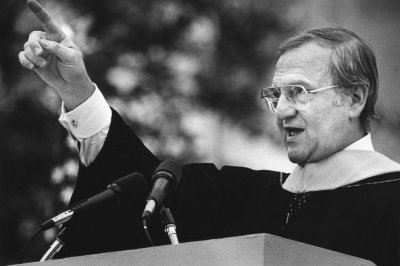 Odd News // 11 months ago
Steer's horn spread breaks Guinness records at 10 feet, 7.4 inches
A longhorn steer in Alabama with a horn span wider than the Statue of Liberty's face now has a Guinness World Record for the longest horns.

Odd News // 1 year ago
World's largest dragon boat built in Cambodia
A Cambodian team broke a Guinness World Record by building a dragon boat that's nearly as long as the Statue of Liberty is tall.

U.S. News // 1 year ago
Statue of Liberty climber guilty of 3 misdemeanors
A federal judge on Monday convicted a woman who climbed the Statue of Liberty on the Fourth of July to protest President Donald Trump's immigrations policies.

TV // 1 year ago
Joe Giudice's daughters vow to fight his deportation
Gia and Milania, two of Joe and Teresa Giudice's children, voiced their heartbreak after their dad was ordered to return to Italy.

The Statue of Liberty (Liberty Enlightening the World ) is a colossal neoclassical sculpture on Liberty Island in New York Harbor, designed by Frédéric Bartholdi and dedicated on October 28, 1886. The statue, a gift to the United States from the people of France, is of a robed female figure representing Libertas, the Roman goddess of freedom, who bears a torch and a tabula ansata (a tablet evoking the law) upon which is inscribed the date of the American Declaration of Independence. A broken chain lies at her feet. The statue has become an iconic symbol of freedom and of the United States.

Bartholdi was inspired by French law professor and politician Édouard René de Laboulaye, who commented in 1865 that any monument raised to American independence would properly be a joint project of the French and American peoples. Due to the troubled political situation in France, work on the statue did not commence until the early 1870s. In 1875, Laboulaye proposed that the French finance the statue and the Americans provide the pedestal and the site. Bartholdi completed both the head and the torch-bearing arm before the statue was fully designed, and these pieces were exhibited for publicity at international expositions. The arm was displayed in New York's Madison Square Park from 1876 to 1882. Fundraising proved difficult, especially for the Americans, and by 1885 work on the pedestal was threatened due to lack of funds. Publisher Joseph Pulitzer of the World initiated a drive for donations to complete the project, and the campaign inspired over 120,000 contributors, most of whom gave less than a dollar. The statue was constructed in France, shipped overseas in crates, and assembled on the completed pedestal on what was then called Bedloe's Island. The statue's completion was marked by New York's first ticker-tape parade and a dedication ceremony presided over by President Grover Cleveland.

The statue was administered by the United States Lighthouse Board until 1901 and then by the Department of War; since 1933 it has been maintained by the National Park Service. The statue was closed for renovation for much of 1938. In the early 1980s, it was found to have deteriorated to such an extent that a major restoration was required. While the statue was closed from 1984 to 1986, the torch and a large part of the internal structure were replaced. After the September 11 attacks in 2001, it was closed for reasons of safety and security; the pedestal reopened in 2004 and the statue in 2009, with limits on the number of visitors allowed to ascend to the crown. The statue is scheduled to close for up to a year beginning in late 2011 so that a secondary staircase can be installed. Public access to the balcony surrounding the torch has been barred for safety reasons since 1916.

FULL ARTICLE AT WIKIPEDIA.ORG
This article is licensed under the GNU Free Documentation License.
It uses material from the Wikipedia article "Statue of Liberty."
Back to Article
/