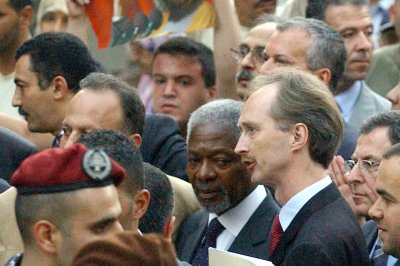 Voices // 1 year ago
Syrians are not ready for a constitution yet
U.S. State Secretary Mike Pompeo met with the U.N. envoy to Syria Staffan de Mistura to discuss "convening a constitutional committee." It's too early for that. 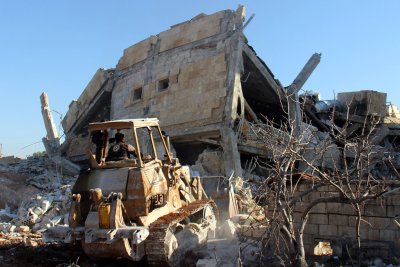 World News // 1 year ago
U.N.: 30,000 displaced in Syria ahead of planned Idlib offensive
The United Nations warned of a potential for the "worst humanitarian catastrophe" of the century in Syria as thousands were internally displaced in the rebel-held enclave of Idlib.

World News // 2 years ago
Dozens killed in land, air attacks on Syrian enclave
Dozens of people died in the Syrian enclave of Eastern Ghouta on Monday in air and ground attacks carried out by Syrian government forces, local officials said. 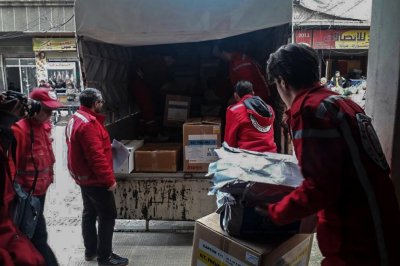 World News // 2 years ago
Aid reaches Syrian enclave for first time this year
An international convoy made its first delivery of food and humanitarian supplies this year to the Eastern Ghouta area of Syria on Wednesday.

World News // 2 years ago
Syrian government to join U.N. peace talks in Geneva
Syria's government delegation is scheduled to arrive in Geneva to hold U.N.-sponsored peace talks with the opposition on Wednesday.

World News // 3 years ago
Turkish forces, rebels in 'near full control' of Syria's al-Bab: Ankara
Turkey's armed forces and Syrian rebels gained near full control of al-Bab in northern Syrian from the Islamic State, according to Turkey's defense minister.

World News // 3 years ago
Syria peace talks begin amid claims of cease-fire violations
Peace talks over the Syrian civil war began on Monday in Astana, Kazakhstan, with the first face-to-face meeting between rebels and the government in six years.

Staffan de Mistura (born 25 January 1947, Stockholm, Sweden) is a long-serving Italian-Swedish diplomat. After a 36 year career in various UN agencies, United Nations Secretary-General, Ban Ki-moon appointed him as his Special Representative (SRSG) for Iraq on 11 September 2007. He was the successor of SRSG Ashraf Qazi and assumed his responsibilities in the Mission Area on 5 November and in Baghdad on 11 November 2007. In July 2009 de Mistura became the Deputy Executive Director for External Relations of the World Food Programme in Rome. On March 1, 2010 de Mistura assumed the post of the Special Representative of the Secretary General (SRSG) in Afghanistan.

De Mistura’s previous UN posts have included that of Deputy Special Representative of the Secretary-General in Iraq, Personal Representative of the Secretary-General for Southern Lebanon, and Director of the UN Information Center in Rome. His work has taken him to many of the World's most volatile trouble-spots including Afghanistan, Iraq, Lebanon, Rwanda, Somalia, Sudan and the former Yugoslavia.

De Mistura was born in 1947, the son of a Swedish mother and an Italian father.

FULL ARTICLE AT WIKIPEDIA.ORG
This article is licensed under the GNU Free Documentation License.
It uses material from the Wikipedia article "Staffan de Mistura."
Back to Article
/