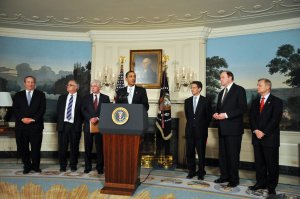 The bottom line is this agreement we've reached will protect consumers

Democrats are in control of the presidency and the Senate

Spencer Thomas Bachus III (born December 28, 1947) is the U.S. Representative for Alabama's 6th congressional district, serving since 1993. He is a member of the Republican Party.

The district includes most of the wealthier portions of Birmingham and Tuscaloosa, along with most of their suburbs, and is one of the most Republican districts in the country.

Bachus was born in Birmingham to Edith Wells and Spencer Thomas Bachus, Jr. He currently lives in Vestavia Hills, a Birmingham suburb. He graduated from Auburn University in 1969 where he became a member of the Phi Kappa Tau fraternity. He served in the Alabama National Guard from 1969 to 1971, during the Vietnam War, while attending law school; he earned a Juris Doctor degree from the University of Alabama's Law School in 1972. Prior to his political career, he owned a sawmill and practiced law until 1992.

FULL ARTICLE AT WIKIPEDIA.ORG
This article is licensed under the GNU Free Documentation License.
It uses material from the Wikipedia article "Spencer Bachus."