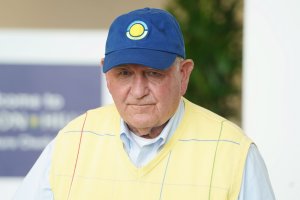 U.S. News // 5 months ago
Federal judge strikes down Trump rule cutting food stamps
A federal judge has struck down a Trump administration rule that would have kicked 700,000 people off food stamps.

U.S. News // 6 months ago
How the 25th Amendment works if president becomes too sick to lead
With President Donald Trump hospitalized with COVID-19 Friday, questions turn to what happens if he loses the ability to govern.

U.S. News // 6 months ago
$14B in new aid opens to farmers; U.S. adds 37K COVID-19 cases
Beginning Monday, farmers and ranchers affected by the COVID-19 pandemic can sign up for the second round of the Coronavirus Food Assistance Program.

U.S. News // 10 months ago
USDA to provide up to $1B in guaranteed loans to rural businesses, farmers
USDA Secretary Sonny Perdue announced Thursday that agricultural producers not eligible for certain USDA loans programs will be able to receive up to $1 billion in guaranteed loans.

U.S. News // 11 months ago
Trump announces $19B relief for farmers, food donations
President Donald Trump on Friday unveiled a $19 billion program to assist U.S. farmers and ranchers, and channel their products to food banks as the coronavirus impacts the nation's food supply chain.

U.S. News // 1 year ago
Agriculture secretary says no more trade aid after Trump raises possibility
Farmers were left bewildered this week after Agriculture Secretary Sonny Perdue reiterated that another round of trade aid payments this year was unlikely despite what the president has said.

The actions of the Army Corps of Engineers and the Fish and Wildlife Service are not only irresponsible, they are downright dangerous

I think Ashley Smith has earned the money. She did exactly what we asked people to do. She absolutely deserves it, and we're ready to pay up now

Award given to kidnap victim in shootings Mar 16, 2005

I wouldn't suggest that, no -- I don't know if that'd be good for their health

This is not the kind of budget I wanted to propose

George Ervin "Sonny" Perdue III, (born December 20, 1946) was the 81st Governor of the U.S. state of Georgia. Upon his inauguration in January 2003, he became the first Republican governor of Georgia since Benjamin F. Conley served during Reconstruction in the 1870s.

Perdue was born in Perry, Georgia. He currently lives in Bonaire, an unincorporated area between Perry and Warner Robins. His father was a farmer and his mother was a teacher. Perdue has been known as Sonny since childhood and prefers to be called by that name (he was sworn in and signs official documents as "Sonny Perdue").

Perdue played quarterback at Warner Robins High School and was a walk-on at the University of Georgia, where he was also a member of the Kappa Sigma Fraternity (Beta-Lambda chapter).

FULL ARTICLE AT WIKIPEDIA.ORG
This article is licensed under the GNU Free Documentation License.
It uses material from the Wikipedia article "Sonny Perdue."
Back to Article
/