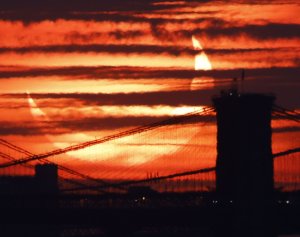 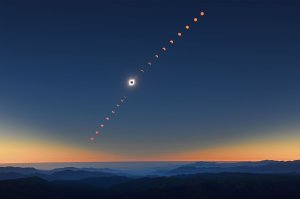 Science News // 2 months ago
April to end meteor shower drought, bring return of 'pink' moon
April will be a month for night owls and early risers as some of the most awe-inspiring astronomy events of the month happen during the second half of the nighttime hours, including the first meteor shower since January.

Top News // 11 months ago
On This Day: Longest solar eclipse of 21st century
On July 22, 2009, millions of people across Asia sought vantage points to view a rare 6 1/2-minute solar eclipse, longest of the 21st century.

U.S. News // 1 year ago
Dazzling 'ring of fire' eclipse wows millions as weather cooperates
For a few magical moments during Thursday's first hours, the moon tried its best to cover as much of the sun as it could, creating a halo of sunlight.

U.S. News // 1 year ago
Solar eclipse to darken sky over NYC, Montreal Thursday morning
The Earth, moon and sun will align again for the second time in as many weeks to create a solar eclipse that will be visible for part of Canada and the United States

Science News // 1 year ago
Northrop's 'life extension' spacecraft heads to the rescue
A second spacecraft designed by Northrop Grumman to extend the life of satellites in orbit is headed toward its target above the Earth.

A solar eclipse occurs when the moon passes between the Sun and the Earth so that the Sun is fully or partially covered. This can only happen during a new moon, when the Sun and Moon are in conjunction as seen from the Earth. At least two and up to five solar eclipses can occur each year on Earth, with between zero and two of them being total eclipses. Total solar eclipses are nevertheless rare at any location because during each eclipse totality exists only along a narrow corridor in the relatively tiny area of the Moon's umbra.

In ancient times, and in some cultures today, solar eclipses have been attributed to supernatural causes. Total solar eclipses can be frightening for people who are unaware of their astronomical explanation, as the Sun seems to disappear in the middle of the day and the sky darkens in a matter of minutes.

FULL ARTICLE AT WIKIPEDIA.ORG
This article is licensed under the GNU Free Documentation License.
It uses material from the Wikipedia article "Solar Eclipse."