Top News // 4 years ago
The Almanac
On Feb. 11, 1990, Nelson Mandela, leader of the movement to end South African apartheid, was released after 27 years in prison. 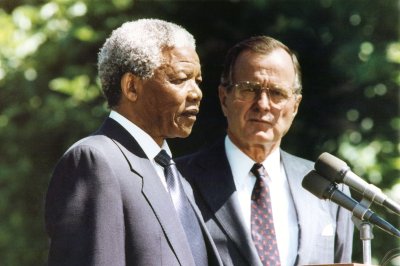 Sheldon was born Sidney Schechtel in Chicago, Illinois, to parents of Russian Jewish ancestry, Ascher "Otto" Schechtel (1894-1967), manager of a jewelry store, and Natalie Marcus. At 10, he made his first sale, $5 for a poem. During the Depression, he worked at a variety of jobs, attended Northwestern University and contributed short plays to drama groups.

In 1937 he moved to Hollywood, California, where he reviewed scripts and collaborated on a number of B movies. After serving in the military during World War II as a pilot in the War Training Service, a branch of the Army Air Corps, Sheldon returned to civilian life and moved to New York where he began writing musicals for the Broadway stage while continuing to write screenplays for both MGM Studios and Paramount Pictures. He earned a reputation as a prolific writer; for example, at one time he had three musicals on Broadway: a rewritten The Merry Widow, Jackpot, and Dream with Music. His success on Broadway brought him back to Hollywood where his first assignment was The Bachelor and the Bobby-Soxer, which earned him the Academy Award for Best Original Screenplay of 1947.

FULL ARTICLE AT WIKIPEDIA.ORG
This article is licensed under the GNU Free Documentation License.
It uses material from the Wikipedia article "Sidney Sheldon."
Back to Article
/