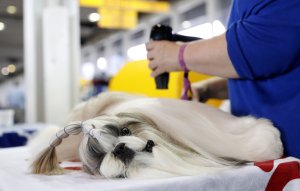 Odd News // 1 year ago
Escaped dog rescued from half-frozen lake on Ohio
Firefighters in Ohio rescued a 3-year-old Shih Tzu who escaped from animal rescuers and ended up stranded in a frozen lake.

Odd News // 5 years ago
C-P-Arf: Firefighter uses mouth-to-snout to bring dog 'back from the dead'
A California firefighter was caught on camera using mouth-to-snout resuscitation to revive a dog that inhaled too much smoke in an apartment building fire.

Odd News // 6 years ago
Shih Tzu stolen in Miami, found in D.C. two years later
A dog that was stolen in Miami two years ago was reunited with its owner in Washington D.C. on Saturday.
Odd News // 8 years ago
Dog returned to Namath's daughter five years after disappearance
The daughter of football hero Joe Namath said her dog is back at her Florida home after disappearing about five years ago.
U.S. News // 9 years ago
Girl, dog, mauled by pit bull
A California teen and her dog are recovering after being attacked and mauled by an unregistered pit bull, the girl's family said.
Odd News // 9 years ago
UPI NewsTrack Quirks in the News
Indiana Jones journal origin a mystery ... Dingo steals woman's valuables ... Man reunited with dog after 5 years ... Pony rides train, tours Berlin ... UPI Quirks in the News.

The Shih Tzu (pronounced /ˈʃiːtsuː/ SHEE-tsoo, from Mandarin ) is a breed of dog weighing 4–7.25 kilograms (8.8–16.0 lb) with long silky hair. The breed originated in China and is among the earliest breeds. Shih Tzu were officially recognized by the American Kennel Club in 1969. The name is both singular and plural.

Shih Tzu (simplified Chinese: 狮子狗; traditional Chinese: 獅子狗; pinyin: Shīzi Gǒu; Wade–Giles: Shih-tzu Kou; literally "Lion Dog"), is the Chinese name rendered according to the Wade-Giles system of romanization in use when the breed was first introduced in America; the Chinese pronunciation is approximately SHIRR-tsə. The name translates as Lion Dog, so named because the dog was bred to resemble "the lion as depicted in traditional oriental art," such as the Chinese guardian lions. The Shih Tzu is also often known as the "Xi Shi quan" (西施犬), based on the name of Xi Shi, regarded as the most beautiful woman of ancient China, and, less often, the Chrysanthemum Dog, a nickname coined in England in the 1930s. The dog may also be called the Tibetan Lion Dog, but whether or not the breed should be referred to as a Tibetan or Chinese breed is a source of argument, the absolute answer to which "may never be known".

A small dog with a short muzzle and large deep dark eyes, with a soft long, double coat, the Shih Tzu stands no more than 26.7 cm (10 1/2 in.) at the withers and with an ideal weight of 4.5 to 7.3 kg (10 to 16 lbs). Drop ears are covered with long fur, and the heavily furred tail is carried curled over the back. The coat may be of any color, although a blaze of white on the forehead and tail-tip is frequently seen. The Shih Tzu is slightly longer than tall, and dogs ideally should carry themselves "with distinctly arrogant carriage." A very noticeable feature is the underbite, which is required in the breed standard.

FULL ARTICLE AT WIKIPEDIA.ORG
This article is licensed under the GNU Free Documentation License.
It uses material from the Wikipedia article "Shih Tzu."