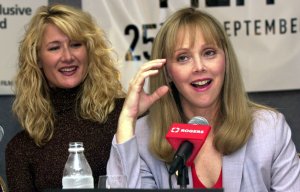 TV // 5 months ago
What to binge: Go back to work with these workplace comedies
The holidays are over and it's time to get back to work in the new year. Here are 10 classic comedies about frustrations on the job, all available for streaming.

Sports News // 1 year ago
Sportsbooks thrive on odd events during pandemic curtailments
Major sports have been suspended in the United States, but bettors still clamor for action on online sportsbooks, with many wagering on competitions that normally don't attract as much attention.

Top News // 4 years ago
The Almanac
On Aug. 23, 1939, Nazi Germany and the Soviet Union signed a non-aggression pact. Less than two years later, Germany launched a blitzkrieg attack on Russia.

Johnny was absolutely on his game, as he always is

Shelley Lee Long (born August 23, 1949) is an American actress best known for her role as Diane Chambers in the popular sitcom Cheers, for which she won the Emmy Award for Outstanding Lead Actress and two Golden Globe Awards for Best Actress.

Shelley Long was born in Fort Wayne, Indiana at 7:15 AM on Tuesday, August 23, 1949. She is the daughter of Ivadine, a school teacher, and Leland Long, who worked in the rubber industry before becoming a teacher. She was active on her high school speech team, competing in the Indiana High School Forensic Association, and in 1967 she won the National Forensic League National Championship in Original Oratory. She delivered a speech on the need for sex education in high school entitled "Sex Perversion Weed." After graduating from South Side High School in Fort Wayne, she studied drama at Northwestern University, but left before graduating to pursue a career in acting and modelling. Her first break as an actress occurred when she began doing commercials in the Chicago area for a furniture company called Homemakers.

In Chicago, she joined The Second City comedy troupe, and in 1975, she began writing, producing, and co-hosting the television program Sorting It Out. The local NBC broadcast went on to win three Emmy Awards for Best Entertainment Show. Her first notable role came in the 1979 television movie The Cracker Factory, in which she portrayed a psychiatric inmate, opposite Natalie Wood. The following year she appeared in A Small Circle of Friends with Brad Davis and Karen Allen. The film about social unrest at Harvard University during the 1960s was a critical success. In 1981, she played the role of Tala in the Ringo Starr film Caveman, starring opposite Dennis Quaid. She played Nurse Mendenhall in an episode of M*A*S*H (TV series) (Series 8 Episode 16 'Bottle Fatigue', 1980).

FULL ARTICLE AT WIKIPEDIA.ORG
This article is licensed under the GNU Free Documentation License.
It uses material from the Wikipedia article "Shelley Long."
Back to Article
/