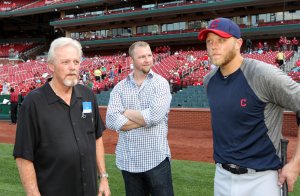 Duncan is the oldest son of Dave Duncan, a MLB catcher and pitching coach. His younger brother, Chris, is also a MLB first baseman and outfielder.

Shelley graduated from Canyon del Oro High School, located in the Tucson suburb of Oro Valley, in 1998. While there he was a teammate of current All Star second baseman Ian Kinsler. He played on the school's 1997 baseball team that went on to capture the 5A State Championship title.

FULL ARTICLE AT WIKIPEDIA.ORG
This article is licensed under the GNU Free Documentation License.
It uses material from the Wikipedia article "Shelley Duncan."
Back to Article
/