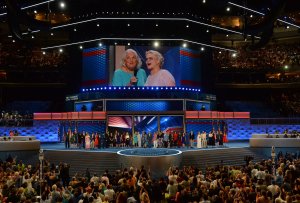 Sharon Marguerite Gless (born May 31, 1943) is an American character actress of stage, film and television, who is best known for her roles as Maggie Philbin on Switch (1975–1978), as Sgt. Christine Cagney in the police procedural drama series Cagney & Lacey (1982–1988) and as Debbie Novotny in the Showtime cable television series Queer as Folk (2000–2005). She is an Emmy Award winner currently playing Madeline Westen on Burn Notice. She plays Jane Juska in A Round-Heeled Woman, a stage adaptation by Jane Prowse of Jane Juska's book. The first production ran in San Francisco in early 2010. Sharon starred in a new production in Miami, December 2010 - February 2011, directed by Jane Prowse.

A fifth-generation Californian, Sharon Gless was born in Los Angeles, California, the daughter of Marjorie McCarthy and sportswear manufacturing executive, Dennis J. Gless. Her maternal grandfather was Neil McCarthy, a prominent Los Angeles attorney for Howard Hughes who also had a large clientele of major film studio executives and actors. Wanting to become an actress, she sought her grandfather's advice and he told her: "It's a filthy business. You stay out of it" but a few years later when she spoke to him again about acting he encouraged her, and gave her money for acting class. She worked as a secretary for the advertising agencies Grey Advertising and Young & Rubicam, and then for the independent movie production companies Sassafras Films and General Film Corporation. After deciding to switch to acting, Gless took classes and in 1974 signed a 10-year contract with Universal Studios. She has described herself as the last of the studio contract players — a salaried, Old Hollywood apprentice system which Universal was the last to employ.

At the beginning of her career, Gless appeared in numerous television series and TV movies, such as Revenge of the Stepford Wives, Faraday & Company with Dan Daily and James Naughton (1973–1974) and Emergency! She played small parts in Marcus Welby, M.D. (1969–1976), until being offered the role of Kathleen Faverty, which she played from 1974 to 1976. This was in addition to a variety of guest-starring roles on television, including the part of the classy young secretary, Maggie Philbin, opposite Eddie Albert and Robert Wagner on the CBS private detective/con artist series Switch (1975–1978). Despite being a newcomer on the show, she got along very well with both Albert and Wagner, both on and off-screen. When the show was canceled after the third season, she thanked both Albert and Wagner for giving a jump start to her career.

FULL ARTICLE AT WIKIPEDIA.ORG
This article is licensed under the GNU Free Documentation License.
It uses material from the Wikipedia article "Sharon Gless."
Back to Article
/