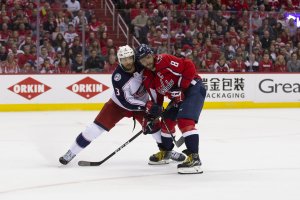 NHL // 1 year ago
Blue Jackets beat Maple Leafs, advance to NHL playoffs
The Columbus Blue Jackets have clinched a spot in the Stanley Cup playoffs after a 3-0 win over the Toronto Maple Leafs in Game 5 of a qualification-round series.

NHL // 3 years ago
Wild visit Blue Jackets in battle of teams on rise
COLUMBUS, Ohio -- Two teams with identical records get together at Nationwide Arena on Thursday night when the Columbus Blue Jackets play host to the Minnesota Wild.

NHL // 3 years ago
Jones' return should boost Jackets vs. Coyotes
COLUMBUS, Ohio -- The sting of a home loss during the weekend became a little more tolerable when the Columbus Blue Jackets learned that all-star Seth Jones will be available to play in Tuesday night's game against the Arizona Coyotes at Nationwide Arena.

NHL // 3 years ago
Capitals, Jackets roll into playoffs on hot streaks
WASHINGTON -- The Washington Capitals and Columbus Blue Jackets are rolling into Game 1 of their Eastern Conference first-round playoff series with goaltenders who are question marks for different reasons.

In very stark terms, what the NATO summit showed is that the United States is not going to be able to count on its NATO allies to fill the gap in Afghanistan

Seth Jones (born October 1972) is a political scientist at the RAND Corporation and adjunct professor at Georgetown University's Edmund A. Walsh School of Foreign Service in Washington, D.C. He was also a professor at the Naval Postgraduate School in Monterey, California.

Jones is a well-known expert on Afghanistan and U.S. foreign policy. Jones attracted considerable attention for his historical analysis of Afghanistan and Pakistan in his book In the Graveyard of Empires: America's War in Afghanistan. The book examines the collapse of the Zahir Shah regime, the rise of the anti-Soviet war, the Afghan civil war in the early 1990s, the Taliban take-over of much of the country in the late 1990s, the U.S-led overthrow of the Taliban regime in 2001, and the subsequent insurgency.

Jones also received considerable attention for his work with Ambassador James Dobbins on nation-building. Their RAND book America's Role in Nation-Building, which examined the U.S. history of nation-building since World War II, suggested that the U.S. needed nearly 500,000 soldiers to stabilize Iraq after the overthrow of Saddam Hussein's government. L. Paul Bremer, head of the Coalition Provisional Authority in Iraq, took the study to U.S. Secretary of Defense Donald Rumsfeld and President George W. Bush. Based on the study's conclusions, Bremer suggested that the United States military needed to reconsider downsizing its forces in Iraq and, on the contrary, increase them to help patrol cities and villages. But Bremer's memo was ignored.

FULL ARTICLE AT WIKIPEDIA.ORG
This article is licensed under the GNU Free Documentation License.
It uses material from the Wikipedia article "Seth Jones."