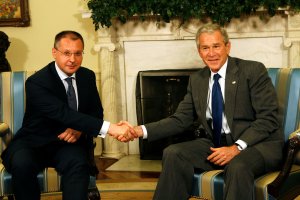 We'll keep working for the realization of the Nabucco project

The financial crisis is creating a situation which is hard to predict but Bulgaria is relatively less affected than the EU. In the recent weeks, however, the prognoses for our main partner, the EU, have worsened

Sergei Dmitrievich Stanishev (Bulgarian: Сергей Дмитриевич Станишев, born May 5, 1966) is the current Prime Minister of Bulgaria and Chairman of the Bulgarian Socialist Party (BSP). He was born in Kherson, Ukraine, which explains the Russian ending of his patronymic.

A native of Herson, Ukraine he descended from a prestigious Bulgarian family from Kukush, Macedonia (Greece). His father Dimitar Stanishev was a member of the Bulgarian Communist Party Politburo.

Stanishev attended Moscow State University, where he received his bachelor's degree in 1989, and his PhD in 1994, both in the field of history. His doctoral thesis was entitled “The system of service promotion of high ranking officials in Russia and its evolution during the second half of XIX century”. In 1998, he specialized in political sciences at Moscow School of political studies. He was a visiting fellow in international relations at the London School of Economics and Political Science in 1999-2000. He also worked as a freelance journalist. In 1995 he became a staff member in the Foreign Affairs Department of the BSP. He was Chief of Foreign Policy and International Relations for the BSP from 1996 to 2001. In May 2000 he was elected a Member of the BSP Supreme Council and Member of the Executive Bureau. In June 2001, he was elected as a member of the Bulgarian National Assembly from the region of Ruse. Sergei Stanishev was a Soviet citizen and then Russian until 1996, when he acquired a Bulgarian citizenship and renounced his Russian one.

FULL ARTICLE AT WIKIPEDIA.ORG
This article is licensed under the GNU Free Documentation License.
It uses material from the Wikipedia article "Sergey Stanishev."