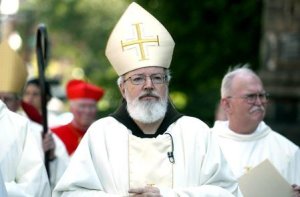 We certainly tried to make it very clear to the nuncio that the bishops are expecting the (pope) to address the abuse crisis, and the nuncio assured us that he was confident that he would

Over one-third of our parishes are operating in the red

Other influences I mentioned were obviously negative, and so my comment was construed as an attack on feminism

Seán Patrick O'Malley, OFM Cap (born June 29, 1944) is an American Cardinal of the Roman Catholic Church. He currently serves as the Archbishop of Boston, and was elevated to the cardinalate in 2006. O'Malley is a member of the Order of Friars Minor Capuchin, commonly known as the Capuchins.

Seán Patrick O'Malley was born as Patrick O'Malley in Lakewood, Ohio, the son of Theodore and Mary Louise (née Reidy) O'Malley. O'Malley, his sister, and his older brother grew up in South Hills of Pittsburgh, and Reading, Pennsylvania. At age 12, he entered St. Fidelis Minor Seminary in Herman, a boarding school for students considering joining the Franciscan order. While there, in addition to studying the normal high school subjects, he also studied Spanish, Greek, German, and Hebrew, and he was active in theater.

On July 14, 1965, at the age of 21, O'Malley professed his vows in the Order of Friars Minor Capuchin and took the name Seán in honor of St. John the Apostle. After he was ordained a deacon, he spent a brief period in Easter Island, Chile. He was ordained a priest on August 29, 1970, at age 26, by Bishop John B. McDowell, an auxiliary of the Roman Catholic Diocese of Pittsburgh.

FULL ARTICLE AT WIKIPEDIA.ORG
This article is licensed under the GNU Free Documentation License.
It uses material from the Wikipedia article "Sean O'Malley."
Back to Article
/