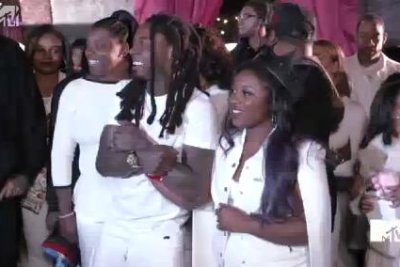 Sean Kingston (born Kisean Anderson; February 3, 1990) is a Jamaican-American singer. He pursued a music career and debuted in 2007 with the album Sean Kingston.

Kingston was born on February 3, 1990, in Miami, Florida and moved to Kingston, Jamaica when he was six. He attended high school in Ocho Rios. His grandfather by marriage was the noted Jamaican reggae producer Lawrence Lindo, who worked under the stage name Jack Ruby. At age 11, Kingston spent 21 days in jail for breaking and entering, and Kingston lived in a car while his mother was incarcerated for identity theft.

Sean Kingston was discovered through MySpace by Tommy Rotem at Beluga Heights, and signed to the label in a partnership deal with Sony. Beluga is a label notable for its focus on discovering and developing artists. In an interview with HitQuarters label head and producer J.R. Rotem described this process with regards to Kingston:

FULL ARTICLE AT WIKIPEDIA.ORG
This article is licensed under the GNU Free Documentation License.
It uses material from the Wikipedia article "Sean Kingston."
Back to Article
/