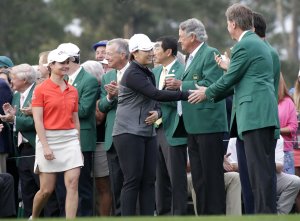 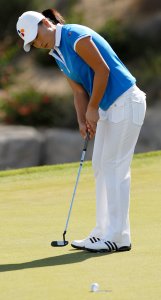 Sports News // 5 years ago
Alison Lee opens three-stroke lead in South Korea
Alison Lee opened with a 7-under par 65 to capture a three-shot lead in the first round of the LPGA KEB Hana Bank Championship.

Golf // 5 years ago
Inbee Park relishes qualifying for LPGA Hall of Fame
SAMMAMISH, Wash. -- Perhaps the allure of the Hall of Fame and adrenaline of being a three-time defending champion has some healing powers.

Sports News // 5 years ago
Brooke Henderson on top after first round of Women's PGA
SAMMAMISH, Wash. -- Canadian teenager Brooke Henderson rode a hole-in-one and birdies on three of her final four holes to a 4-under 67.

There is so much water on the golf course still, but we can't do anything about it

From my practice time this morning, I knew it was going to be very difficult today

Pak Se Ri (Korean: 박세리, also 朴世莉; born 28 September 1977) is a South Korean professional golfer, playing on the LPGA Tour. She was inducted into the World Golf Hall of Fame in November 2007.

Pak turned professional in 1996, a year before she moved to the United States as a 20-year-old. In 1996 and 1997, she won six tournaments on the LPGA of Korea Tour. Pak joined the LPGA Tour full-time for the year 1998, crowning her rookie season with victories in two majors: the McDonald's LPGA Championship and U.S. Women's Open. At just 20 years of age, she became the youngest-ever winner of U.S. Women's Open. Pak won a 20-hole playoff for that victory, making that tournament - at 92 holes in length - the longest tournament ever in women's professional golf. Four days after the U.S. Women's Open win, Pak shot a then-LPGA record 61 during the second round of the Jamie Farr Kroger Classic. She won the Rolex Rookie of the Year award for that season.

FULL ARTICLE AT WIKIPEDIA.ORG
This article is licensed under the GNU Free Documentation License.
It uses material from the Wikipedia article "Se Ri Pak."
Back to Article
/