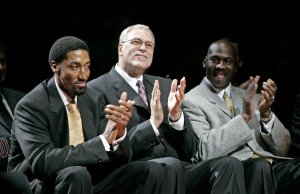 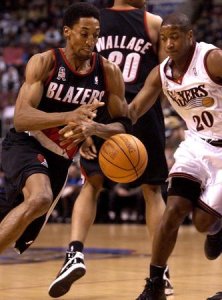 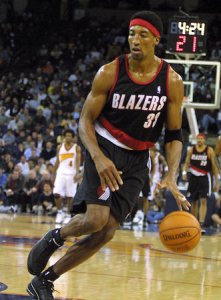 Entertainment News // 1 year ago
John Legend thanks his dad in teaser for Father's Day special
John Legend speaks to his dad and spends time with Chrissy Teigen and their kids in the ABC special "John Legend and Family: A Bigger Love Father's Day."

NBA // 3 years ago
Magic, Bulls leave country for matchup in Mexico
In the mid-1990s, a trip to Mexico City with the Chicago Bulls and Orlando Magic would have displayed stars such as Michael Jordan, Scottie Pippen, Penny Hardaway and Shaquille O'Neal on an international stage.

I'm thinking of trying to come back for the playoffs

Next year I still have an opportunity, so it's not like I'm going out yet

I question myself whether or not I can play another year

I've always been a Bull in my heart, and now I will play where my heart is

Scottie Maurice Pippen (born September 25, 1965) is a retired American professional basketball player who played in the National Basketball Association (NBA). He is most remembered for his time with the Chicago Bulls, with whom he was instrumental in six NBA Championships and their record 1995–96 season of 72 wins. Pippen, along with Michael Jordan, played an important role in transforming the Bulls team into a vehicle for popularizing the NBA around the world during the 1990s.

Considered one of the best small forwards of all time, Pippen was named to the NBA All-Defensive First Team eight times (all consecutive) and the All-NBA First Team three times. He was a seven-time NBA All Star and was the NBA All-Star Game MVP in 1994. He was named one of the 50 Greatest Players in NBA History during the 1996–97 season, and is one of four players to have his jersey retired by the Chicago Bulls (the others being Jerry Sloan, Bob Love, and Michael Jordan). During his seventeen-year career, he played twelve seasons with the Chicago Bulls, one with the Houston Rockets and four with the Portland Trail Blazers, making the postseason sixteen straight times. He is third on the list of most postseason games played, behind Robert Horry and Kareem Abdul-Jabbar. Pippen is also the only person to have twice won both an NBA championship and an Olympic gold medal in the same year. Pippen was inducted into the Basketball Hall of Fame on August 13, 2010.

Scottie Pippen was born in Hamburg, Arkansas, and attended college at the University of Central Arkansas. At the start of his college career, the then 6 ft 1 in (1.85 m) Pippen was a walk-on for the now-former NAIA school and depended on his stipend for being the team manager and his summer job as a welder to fund his education. He eventually reached 6 ft 8 in (2.03 m). Pippen's 23.6 points per game average and near 60% field goal shooting earned the Central Arkansas senior Consensus NAIA all-American honors in 1987.

FULL ARTICLE AT WIKIPEDIA.ORG
This article is licensed under the GNU Free Documentation License.
It uses material from the Wikipedia article "Scottie Pippen."