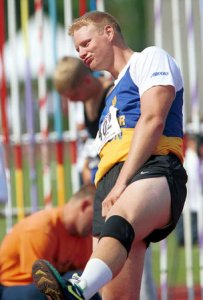 Harry Henry Russell, better known as Scott Russell (25 September 1868 and died on 28 August 1949), was an English singer, actor and theatre manager best known for his performances in the tenor roles with the D'Oyly Carte Opera Company. He was the brother-in-law of D'Oyly Carte contralto Louie Rene.

Russell was born in Great Malvern and studied singing with Gustave Garcia at the Royal Academy of Music.

Russell made his stage debut in the chorus of the Agnes Huntingdon Company in New Jersey in the United States. His London debut came with the D'Oyly Carte Opera Company at the Savoy Theatre in 1893, where he created the role of Lord Dramaleigh in the original production of Utopia, Limited. In 1895, he created the roles of Bertuccio in Mirette and Pedro Gomez in The Chieftain at the Savoy. He also created the roles of and Dr. Tannhauser in The Grand Duke (1996), He in Weather or No (1896-97), and Count Cosmo in His Majesty (1897), among others. Other roles with D'Oyly Carte in the 1890s included Mr. Box in Cox and Box, Cyril in Princess Ida, Leonard Meryll in The Yeomen of the Guard, Nanki-Poo in The Mikado, and Frederic in The Pirates of Penzance.

FULL ARTICLE AT WIKIPEDIA.ORG
This article is licensed under the GNU Free Documentation License.
It uses material from the Wikipedia article "Scott Russell."