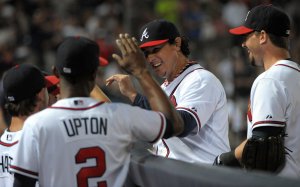 Scott Jeremy Downs (born March 17, 1976 in Louisville, Kentucky) is an American professional baseball relief pitcher with the Los Angeles Angels of Anaheim of Major League Baseball. He has previously played for the Chicago Cubs, Montreal Expos and Toronto Blue Jays. He has been both a starter and a reliever during his baseball career.

Downs was born and raised in Louisville, Kentucky. He attended Pleasure Ridge Park High School, where he was selected as Kentucky's Mr. Baseball. He was selected by the Atlanta Braves in the 12th round of the 1994 Major League Baseball Draft, but he opted to attend the University of Kentucky instead of signing a professional contract. At the end of his junior season at Kentucky, he was selected by the Chicago Cubs in 3rd round (94th overall) of the 1997 Major League Baseball Draft. In 2000, Downs married his high school sweetheart Katie Sisler, and lives with her and their children in Lexington, Kentucky.

He made his debut for the Williamsport Cubs, of the New York-Penn League a Low-A affiliate of the Cubs. He made his way through the minor leagues and eventually made the Cubs roster for opening day 2000. Throughout his minor league career he has played for 10 different teams in different levels from 1997 to 2005. His numbers were solid. He posted a 46–32 career record with an ERA of 3.48, compiling 539 strikeouts in 706.2 innings pitched.

FULL ARTICLE AT WIKIPEDIA.ORG
This article is licensed under the GNU Free Documentation License.
It uses material from the Wikipedia article "Scott Downs."