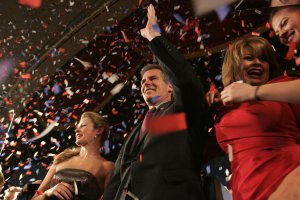 U.S. News // 2 years ago
Agents uncover 600-foot drug tunnel from Mexico to old KFC in Arizona
Arizona authorities have uncovered an old drug-running tunnel beneath the U.S. border that stretches from a home in Mexico to a former Kentucky Fried Chicken. Conventional wisdom is, the high turnout favors the Democrat. But in a special election, high turnout is volatile because you don't know who's showing up

With all due respect, I really don't know a lot of you people, and you don't know me. But maybe that's good, because I'm going to vote how I want to vote

He wasn't drinking, and no drugs. He swung around to pick up some people. Apparently, he had the big stereo system with the woofers and he was parked in the fire lane. When the officer apparently knocked on his window, he took off, thinking that they wanted him to move, apparently

Brown faced the Democratic candidate, Massachusetts Attorney General Martha Coakley, in the 2010 special election to succeed U.S. Senator Ted Kennedy. While initially trailing Coakley in polling by a large margin, Brown in January 2010 became the first Republican elected to the U.S. Senate from Massachusetts since Edward Brooke in 1972.

Prior to entering the state legislature, he had experience as a town selectman and assessor. He is a practicing attorney, concentrating in real estate law and serving as defense counsel in the Judge Advocate General's Corps of the Massachusetts Army National Guard. Brown is a graduate of Wakefield High School (1977), Tufts University (1981), and Boston College Law School (1985).

FULL ARTICLE AT WIKIPEDIA.ORG
This article is licensed under the GNU Free Documentation License.
It uses material from the Wikipedia article "Scott Brown."
Back to Article
/